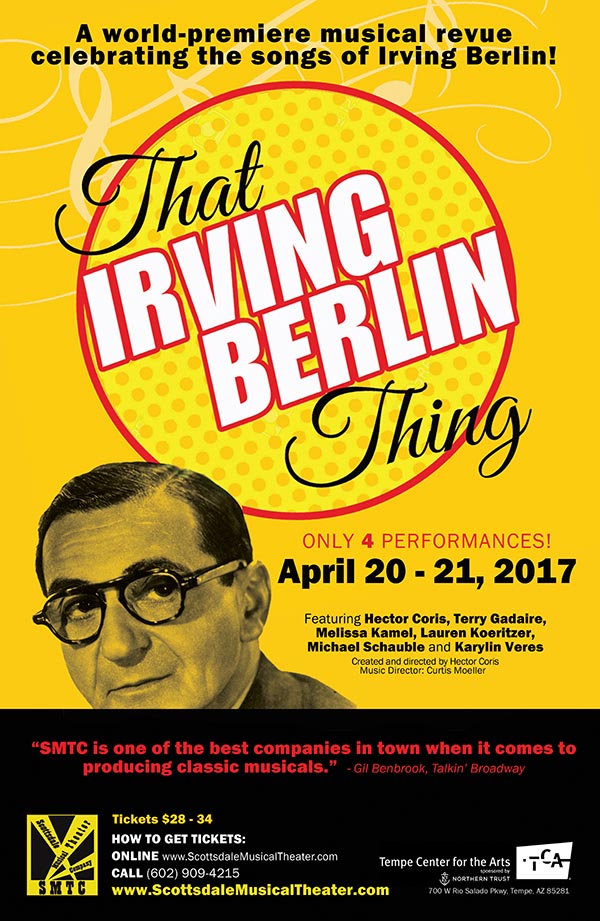 SMTC PRESENTS WORLD-PREMIERE OF “THAT IRVING BERLIN THING” –
A MODERN REVUE OF A BELOVED AMERICAN TREASURE! 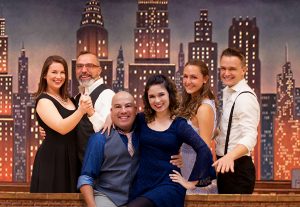 Scottsdale Musical Theater Company presents the world-premiere of That Irving Berlin Thing – a two-act revue of 40+ of the beloved songwriter’s most notable – and rarely-heard – material.

What is that “thing” Irving Berlin had that made his songs so popular and accessible to the masses, conquering Tin Pan Alley, Broadway and the movies? More than just a biography of the legendary composer, That Irving Berlin Thing explores the cultural impact Berlin had not only during his time, but for decades to come – from his early association with the “Ziegfeld Follies” and Hollywood, his military service and undying patriotism to his unabashed celebration of the holidays.

“It is vital to preserve these classics of the ‘Great American Songbook’ which are in danger of becoming lost in the public consciousness. These songs are timeless and speak to a huge part of our cultural history,” states creator and long-time cabaret performer Hector Coris. “The musical arts are propelling so quickly into the future that we are in danger of forgetting the rich traditions on which Broadway, Hollywood and popular music were built. This is not just nostalgia for the old folks but a lesson for future generations to know where good songs came from. Plus, with the current tempestuous arguments against immigrants, Irving Berlin is a prime example of a wayward soul welcomed into this country’s fabric and his ever-lasting contributions therein.”

SMTC prides itself on “bringing Broadway’s favorites back to life”, presenting full, large-scale productions of Broadway musicals in their original forms, as they were meant to be seen. Utilizing professional sets and costumes, great local talent and a full live 20+ piece orchestra, SMTC has been called “the best theatre company in the Valley when it comes to producing classic musicals.” (Talkin’ Broadway). Please contact Hector Coris at (602) 909-4215 or via email at [email protected] for press seats or any additional information. The company website is www.Scottsdalemusicaltheater.com.