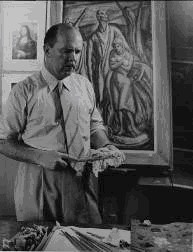 Originally published March 5, 2010 – What do the Petersen House and fine art have in common? We’ll get to the answer, but first –

Most people who have travelled through the intersection of Priest and Southern have seen the 1892 Petersen House ─ a magnificent Queen Anne Victorian structure standing in stark contrast to the modern architecture surrounding it.

If you’ve been here any length of time you know that the once rural farmhouse was constructed by Danish immigrant Niels Petersen. Hard as it is to believe, Petersen’s dream home was about a half-hour’s buggy ride into downtown Tempe.

After Niels Petersen died in 1923 and his wife Suzanne Decker Petersen passed away in 1927, the grand mansion entered into a period of slow decline.

Thomas John Harter was only 15 years old when his family uprooted themselves from Naperville, Illinois to the burgeoning city of Los Angeles. Two years later the teenager became a lithographer’s apprentice ─ eventually graduating to journeyman. He was also a staff artist at the Los Angeles Examiner.

In 1929 Harter was promoted to chief of the paper’s art department.

At night Harter attended art classes where he met Tempe-borne Helen O’Connor. The couple wed in 1930 after which they moved to New York to build their careers as artists while working as commercial illustrators.

Harter even showed his work at the Brooklyn Art Museum.

In 1935, the Harters spent the winter in Tempe. So taken by the light and beauty of the west, they built an adobe studio in which to work.

Harter declared: [Southern Arizona] “…has more accessible scenes and subjects than any other place with which I am familiar, and it is surely the most picturesque and dramatic part of the Southwest. Why, I could paint for years within a few miles of either Tucson or Phoenix without exhausting the possibilities of either place.”

After more than a year of pressure, Harter acquiesced to Gammage’s pressure agreeing to move permanently to Tempe. Thus began an illustrious 38-year career at ASU. Harter retired in 1975.

Harter had a profound influence on the local art scene both as an educator and as a nationally recognized painter.

Reflecting on Harter’s career, Rudy Turk, Former Director of Arizona State University (ASU) Art Collections observed: “He probably contributed as much to Arizona overall and Arizona art in particular as anyone we’ll ever know.”

But what does all this have to do with the Petersen House? I’m going to tell you but we are out of space for this week.

If you want to know the answer sooner, you can find out lots more about Tom Harter and see examples of his work in a special exhibit at the newly reopened Tempe Historical Museum. Otherwise you’ll just have to wait a week.