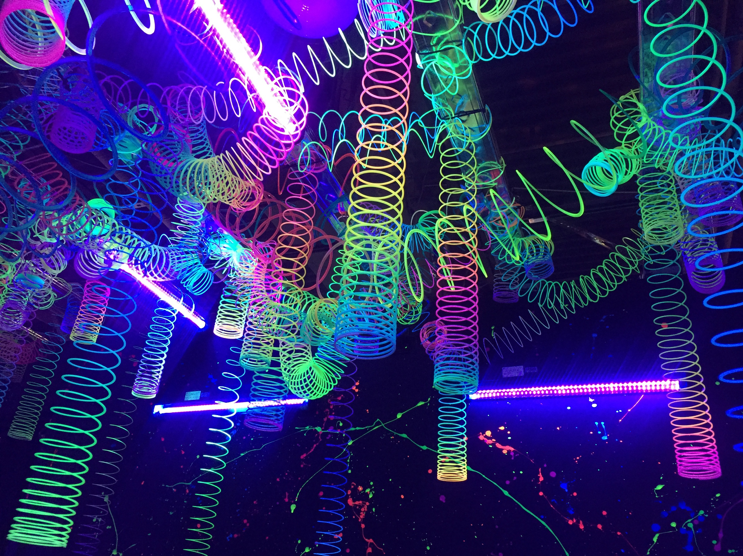 Imagine a room filled with glow in the dark Slinky’s hanging from the ceiling. As that door is shut and another one opens you find yourself in a room with rubber ducks aligned on shelves and a massive tubs filled with yellow balls. This is one of the newest additions to the Tempe area, The Scene.

The two owners ,Jinx Smith and Devin Weiss, have been long time friends and decided to start something that they never have before. Smith had heard of this business called The Happy place and googled what it was. She came to find out that it was a spot to take Instagram photos.

About a month later Jinx and Weiss were having a discussion and they talked about something similar to that in New York. So they flew out and toured some of the Instagram photo businesses and fell in love with the idea they said.

“We thought we are the fifth largest city in the country. We should be able to do this,” Jinx said.

As soon as they came back from their New York trip they started brainstorming.

“We started jotting down about 100 room ideas for rooms. Obviously we can’t do 100.A lot of them were off the charts as far as the scope of expense of putting together this project,” Jinx said.

One of the main things that The Scene is discussing currently is their new location. Their lease will end at the beginning of May and they have yet to decide what there next move is. The team had a meeting last Friday to discuss some of these topics.

“If our numbers do pan out and they keep on escalating then we will stay in Arizona. At least one more in Arizona and then maybe go elsewhere. And elsewhere? Probably Vegas or San Diego. These are things that we’ve all talked about but haven’t put a postal to it or had any real knowledge of what’s out there for us.” Jinx said.

A main aspect of how The scene continues to grow is the aspect of social media. The Scene’s marketing director Moriah Smith is in charge of all of the social media that The Scene has.

“I’m a little bit younger and understand more of the social media aspect. They are super creative, obviously, they just needed help with connecting with the younger generation,” Moriah Smith said.

When the customers go through the art experience they are encouraged to tag The Scene on Instagram and Moriah Smith said they’ve gained a lot of traction from that.

“Once someone posts it on their social media, they’re like ‘where were you?’, ‘where was that at ?’, ‘I want a photo like that’ .It’s just been an ongoing trend of fire that’s the more people post about it the more people are trickling in. They’ll say ‘oh I saw that photo online and I want a photo just like that’. The social media piece is huge for us  growing the business,” she said.

The owners like to call themselves creative directors and Moriah Smith said that bringing the community together around the interactive art makes the owners as well as herself happy.

“Here we really love that we are bringing something to the local community I live here and the owners have been here for 30 plus years so we love bringing that interactive piece to the art. It creates a sense of community,” Moriah said.

The Scene brought in a local Arizona State University art student to paint a mural in the back window of the business facing University.

“ When we first signed our lease and knew what we wanted to do with the space. The City of Tempe only allows you to promote your company using 25% of the window space,” Jinx Smith said.

They decided to hire Jesus Orozco,23, to paint a graffiti like mural and he said he was more than happy to do the job.

“For the most , I just let my creative juices flow out and put a little bit of my touch on there just to make it a little more fresh and pop out to whoever was driving by,” Orozco said.