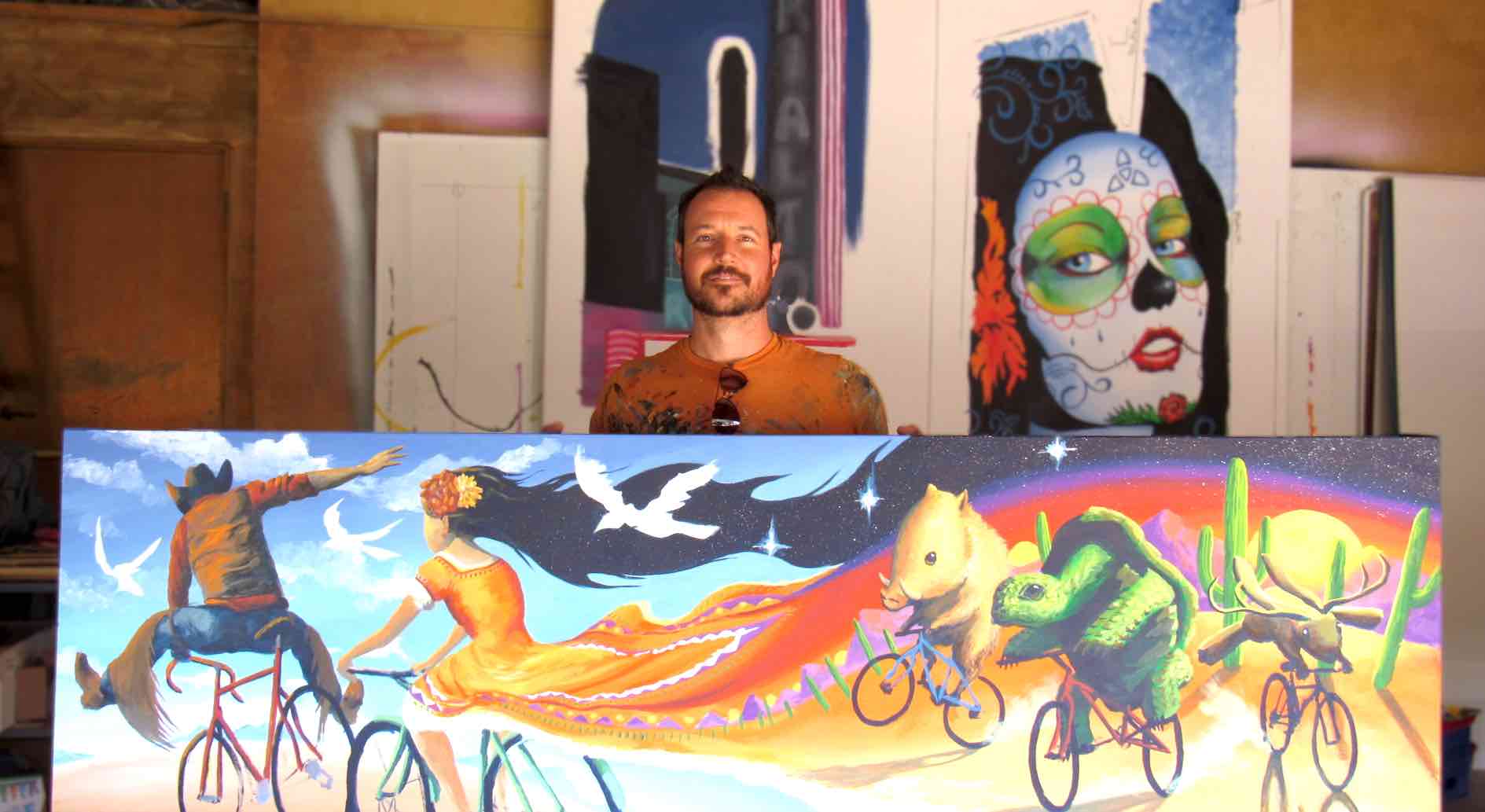 There exists a unique dichotomy in Tucson between the preserved traditional Southwestern culture and the modern, vibrant lifestyle of an up-and-coming city. This contrast is perhaps best embodied downtown—an oasis of skyscrapers in the center of a flat desert landscape. Decorated with neon lights and packed tight with boutique restaurants and bars, downtown Tucson carries an eccentric personality of its own that runs deep even in the artwork that ornaments its walls. We are lucky in Tucson to boast a prominent community of local artists—among which is the celebrated Joe Pagac. 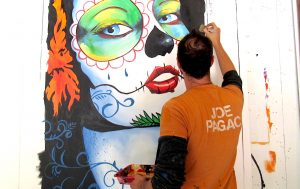 Most residents of the Tucson area would recognize his work. From the walls of the Rialto Theater to the murals at Bookman’s, Pagac’s murals are scattered throughout Tucson. His public art career kickstarted after an unexpected call from a friend of his who worked as a concert promoter. He offered Joe a job painting a mural at the Phoenix First Friday’s art walk that was ten times bigger than anything he’d ever done before and he had four hours to do it—“So I was like, alright—let’s do it,” Pagac says, laughing. “People loved it while I was painting it, but it was terrible,” he jokes. This concept was new and attracted a lot of attention—including the attention of a local Phoenix reporter who criticized his work. However, that did not deter him. He returned to Phoenix for the following First Friday and received allover positive feedback.

Later, humorist John Hodgman came to Tucson and noticed the advertisement painting that Pagac had done on the side of the Rialto. “He called me up and said, ‘Oh my god, I love this mural. I would love if you would paint live on stage while I’m doing my performance.” And again, Pagac agreed to perform art in a way he never had before. Hodgman incorporated Pagac into the entire performance—even having him do cold readings of Hodgman’s material in front of the 1500-member audience. Due to the success and positive reception of the show, Hodgman again invited Pagac to one of his performances in Los Angeles. “I immediately cancelled everything and went out there,” Pagac says. Upon his arrival, he was unexpectedly greeted by a crew including Mel Brooks, Zach Galifianakis, and Bryan Cranston. The performance never aired, but Pagac began live painting more frequently and also posts timelapse videos of the process of creating some of his murals on YouTube.

One of his favorite murals is an underwater scene located near Toole Ave and Stone Ave in downtown Tucson. It was painted featuring the face of homeless men and women in Tucson. Pagac asked them to pose for him and compensated them for their time. “They were really great to work with,” he says. “They just have such great faces… Their faces really tell a story.”

Another of his favorites is painted on Bookman’s. Though it is faded now, it features his sister’s family.

However, Joe Pagac did not always plan on becoming a painter. Though he had always been told by his teachers and family that he was a talented artist, he began his education at the University of Arizona as a film major with the goal of doing practical movie effects or becoming a film director. He took a drawing 101 class and his professor recognized his talents. She suggested he consider pursuing art, to which he recalls his response, “I was like, ‘Nobody makes a living as an artist, you know; it’s ridiculous!’” But with his teacher’s further support, he switched majors and now his talent has secured him a full schedule for the past fourteen years as a full-time painter. Pagac attributes his success in part to his talent and training, but “being artistically talented is only a small part of it,” he claims. “I’m doing art only about one-third of the time, because there’s all the networking and the whole business side of it that you have to do too. There’s a lot of hustle.”

Many of his pieces are requests by clients for a specific purpose. As a result, Pagac does not spend as much time on personal work. However, “It can’t all be about art,” he states, “You’ve got to have variety.” Pagac spends his free time traveling. From Italy to Spain to Southeast Asia and India, he has been all over. This past fall, he and his fiancé biked 1200 miles from Seattle and Yellowstone and lived and camped off of their bikes. “As soon as I’ve got some money in the bank,” he claims, “I set aside a chunk of time, and I just go.”

Despite his extensive travels, Pagac has stayed a Tucson resident his whole life. Part of what makes living and working in Tucson so enjoyable for Pagac, he claims, is that the Tucson population is so supportive of creative people. He states that after his graduation from college, “everyone was going to LA and New York and all these bigger places, and I just loved it here so I decided to stay and try to make a difference.” Over the years, the community of public artists has grown more and more. Tucson has benefitted from this community’s artistic endeavors. Upon turning a street corner, one may be welcomed with an unexpected pop of color and original art. “I think a lot of the cityscape in general, like architecture and all that, has gotten so boring that anything you can do to try to add interest to the landscape and pull people from their electronic landscape is nice,” Pagac suggests.

Often using bright colors and bold designs, Pagac’s work is impossible to ignore for passersby. After noticing how frequently people were posing with his art and posting on social media, he began creating photo walls specifically designed for people to take pictures with. “I try to have fun with it. I try to do things now to try to make people smile or laugh that gives them kind of uplifting feelings… Especially with public art, you don’t really want to bring people down if you’re going through all the effort to get them to look up from their cell phones and pull them out of their daily grind.”

Overall, Pagac’s unique and diverse work is a purposeful and striking contribution to the Tucson art community. While Tucson may not be as large a hub for street art as Miami or New York, our public murals energize and add quirky charm our Southwestern culture. 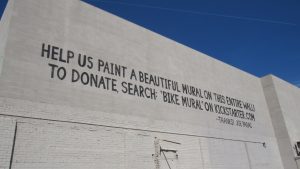 Joe Pagac is currently running a Kickstarter campaign to raise money for a 130 foot by 30 foot mural in downtown Tucson. The mission of the mural is bring the community together and promote a healthy, active lifestyle. Click here to donate.

Check out Joe’s website to see more of his work.