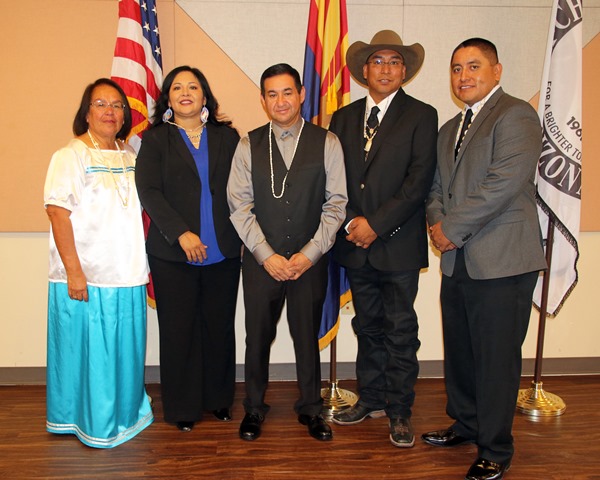 The Ak-Chin Indian Community has elected Robert Miguel as chairman, Gabriel Lopez as vice-chairman, and Delia Carlyle, Ann Antone and Alvin Antone as council members. Miguel and Lopez will serve four-year terms, and the three council members will serve two-year terms. This year’s election was particularly historic because it was the first time Community members were able to vote for chairman and vice-chairman. A change to the constitution was adopted in July 2016 allowing for candidates to run for a specific office and for Community members to vote specifically for the chairman and vice chairman in addition to council members.

Miguel, who was the incumbent chairman, is passionate about Community growth and a growing infrastructure. Additionally, he is a strong believer in prioritizing education by providing a greater level of educational resources both to adults and children.

Lopez, who has previously served four terms on the council, has also played an active role in the Ak-Chin Indian Community,  having served on the Education Committee, Industrial Park Board, Livestock Association, Community Charter School Committee, Masik Tas Committee and Community Justice Complex Committee. Lopez is a strong proponent of upholding O’odham culture and traditions, and in turn keeping the O’odham language alive.

As a councilmember, Carlyle, who has previously served two consecutive terms on the council, most recently as vice-chairman, is looking to expand the Community’s economic self-sufficiency. Additionally, she places great importance on the progressive teamwork on the council.

Ann Antone, who will be serving her second term with the council, had previously held several jobs in the Community, including positions with the Recreation and Education departments and at Harrah’s Ak-Chin Casino.  She is committed to important issues facing the Community such as greater revenue-generating projects, education, and economic development and further positioning the Community as one of the best tribal communities in North America.

While Miguel, Lopez, Carlyle and Ann Antone have all served previously on the council, Alvin Antone will be serving his first term. His focus will be on improving education, healthcare, and farming and he looks forward to continuing to grow the Community’s enterprises, while still maintaining the Ak-Chin Indian Community’s traditions and culture.

“I’m honored that the first time the Community was able to elect its chairman, they chose me,” said Miguel. “Together, the newly elected Tribal Council will work together to strengthen the Ak-Chin Indian Community resources including education, healthcare and continued economic endeavors.”

The Ak-Chin Indian Community is nestled into the Santa Cruz Valley of Southern Arizona. The Community lies 35 miles south of Phoenix in the northwestern part of Pinal County.  Ak-Chin is an O’odham word translated to mean “mouth of the wash” or “place where the wash loses itself in the sand or ground.” Ak-Chin has an enrollment of more than 1,022 tribal members and a land base of just over 22,000 acres. The Ak-Chin Indian Community has a variety of business enterprises including Harrah’s Ak-Chin, Ak-Chin Southern Dunes Golf Club, Vekol Market, UltraStar Multi-tainment Center and Santa Cruz Commerce Center. For more information, visit www.ak-chin.nsn.us/.