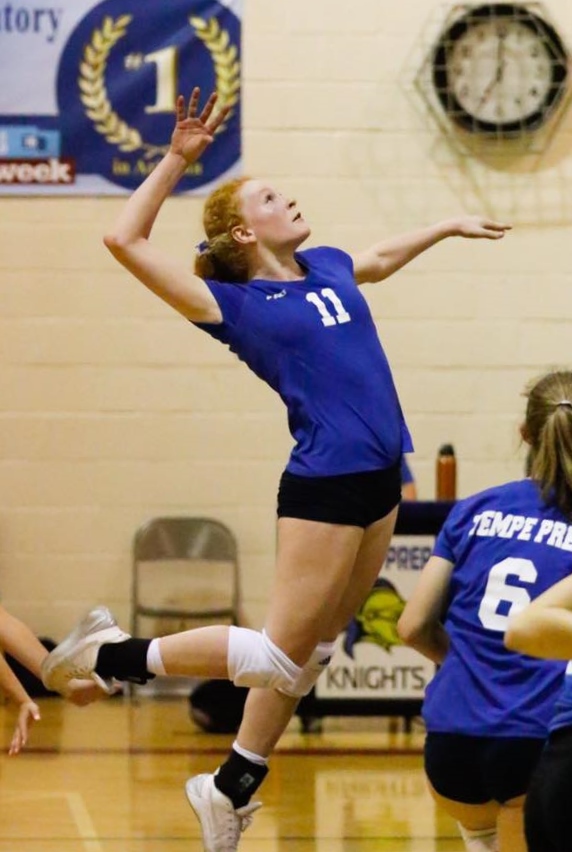 Congratulations to Tempe Prep Junior Mary Shroll for being named the MaxPreps Arizona High School Player of the Week by the American Volleyball Coaches Association!

Here are Shroll’s impressive statistics for the 9 sets played with Tempe Prep’s Knights in that week alone:

A dedicated student and athlete recruited by college Division I teams, Mary is currently leading the state across all Divisions in kills per set and hitting percentage with a .513  hitting  percentage and 8.2 kills/set.

Last spring, PrepVolleyball named Shroll to the “Soph 79”, identifying the 79 best varsity-playing sophomores in the country.  In May, Shroll was named the AIA Player of the Year in the 2A Conference.

Tempe Preparatory Academy is a tuition-free public charter school in Tempe for students in grades 6-12 that provides a nationally acclaimed liberal arts education based on the Great Books of Western Civilization with an exceptional math, science, foreign language, humanities, and fine arts curriculum. Tempe Prep has been recognized by the Arizona Board of Regents as having the highest percentage of college graduates in the state (2016) and has been named the #1 high school in Arizona and # 15 in the U.S. by Newsweek (America’s Top High Schools 2016).

For more information about the school or enrolling at Tempe Prep, visit the school’s website at tempeprep.org.