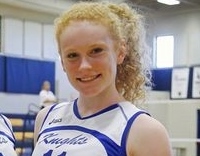 In February of this year, PrepVolleyball named her to the “Soph 79”, identifying the 79 best varsity-playing sophomores in the country.  In May, Shroll was named the AIA Player of the Year in the 2A Conference.