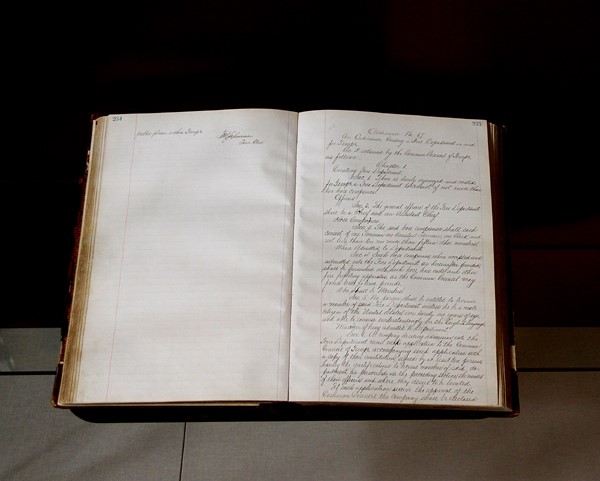 Originally published in February 19, 2010 – Oh how far we’ve come in a little more than a century. Today City Council meetings are recorded exactly as they occur on audio and video tape.

Minutes of meetings and language of ordinances are transcribed on a word processor. And soon after appear online for anyone who cares to view them.

Today we think nothing of making photocopies or easily printing documents on computer printers.

But there was a time when “cut-and-paste” was not in the vocabulary ─ a time when humans were directly connected to the minutiae of government.

When the newly remodeled Tempe History Museum reopens Saturday, February 27th, visitors will for the first time be able to get up close and personal with some of the most important documents of our community’s past.

One of the wonderful treasures never before on display is a large, leather-edged tome. Within its still bright pages are the first ordinances enacted in the city.

Most apparent in this magnificent volume is the bold, clear hand of F.M. Schureman, Tempe Town Clerk who painstakingly transcribed each ordinance into this large tome ─ thereby leaving a remarkable record connecting us directly to Tempe’s early years.

Ordinance 67 stands out. Signed by Mayor Samuel Brown on January 19, 1903, it mandated the creation of a municipal fire department ─ the culmination of nearly a decade of effort to protect a growing community from the ravages of fire.

Earliest mention of fire was 1888 when the Tempe News admonished officials that “town ditches should be kept full of water. The lack of this essential fluid was severely felt at our late fire.”

A year later the Andre Building at 3rd Street and Mill burned to the ground.

The 1890’s was a particularly bad decade for fires. The Hayden Flour Mill saw its wood-framed structure destroyed in 1890.

In 1894 the Tempe Hotel across the street from the rebuilt Andre Building was consumed by flames. As was the Arlington Hotel two years later.

It easy to understand why the town needed a full-time fire professional, department rather than a voluntary brigade that had been protecting the city for years.

As most laws go, Ordinance 67 is written in the dry language lawyers love to use. But beneath its profluent, proprietary prose there is something of great magnitude.

“An Ordinance creating a Fire Department in and for Tempe. Be it ordained by the Common Council of Tempe…there is hereby organized and created a Fire Department…to consist of not more than two hose companies.”

It was mandated that “No person shall be entitled to become a member of said Fire Department unless he be a male citizen of the United States, over twenty-one years of age and can converse understandably in the English language.”

The mundane legalese most assuredly belied the sheer elation the town council must have felt over the promise of safety a municipal fire department would provide the community.