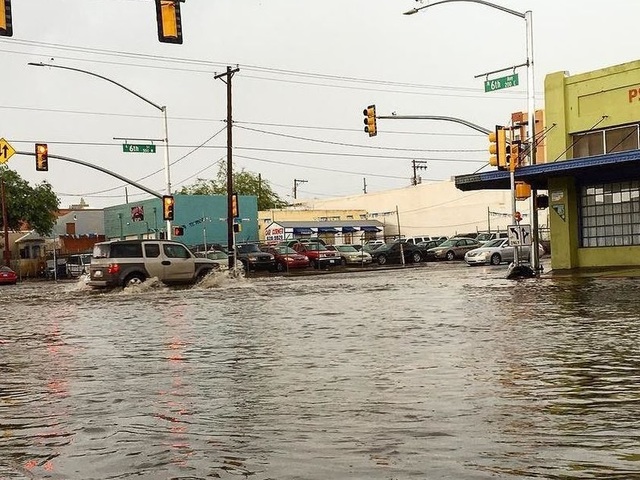 This has been a crazy summer with wild weather, and Tucson has seen some intense flooding.

Late last month, Seventeen hikers were stranded by a flash flood in the Tanque Verde Falls area of Redington pass, and they had to be rescued by crews and a helicopter. Hiking in canyons during this time can be dangerous because burst storms can dump inches of rain in a short amount of time, causing a flash flood. While flash flood warning are sent out from the National Weather Service, service in remote areas are patchy at best, and unless swimmers and hikers are equipped with a weather radio, they often are unaware of impending flooding and dangerous conditions.

Officials recommend that people heading outdoors to wilderness areas should check weather alerts ahead of time to be on the safe side, although weather and precipitation in the Southwest can be unpredictable.

Hikers aren’t the only ones in peril during flash floods- motorists can easily become stuck too. One of Tucson’s notable examples is the four blocks of Arroyo Chico running through midtown, where residents, business owners and more have weighed the pros and cons of incorporating concrete walls and culverts to protect from floods.

After three decades of growing concerns and flood control research, studies, and planning, federal funds will help crews complete the last leg of a flood-protection project. By next summer, the Army Corps of Engineers should issue a contract to construct 5-foot-high flood barrier walls along the Arroyo from South Campbell Avenue to East Parkway Terrace.

This will be the finishing touch to more than $50 million worth of culverts and detention basins designed to protect homes and business along a six-smile stretch of easily-flooded wash and tributaries. Construction is expected to be completed in 2019.

The earlier efforts produced more than $50 million worth of detention basins and culverts aimed at protecting homes and businesses along six miles of wash and tributaries. This year, federal money became available for the last leg.

While some community members are concerned about construction and it’s impact on the trees and wildlife, others welcome any sort of protection against flood water. Some county officials and advocates are pushing for a toned-down project that will minimize impact on the animals and natural habitat. Learn more about the project on the official Pima County website and pay attention to forecasts before venturing outdoors this summer!