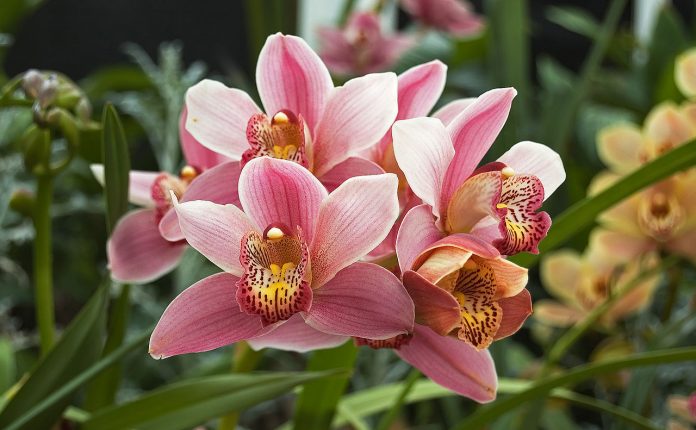 All right, let’s be real! You love Orchids! Am I right? I know that I do! Every color variation is so classy and brings such a luxurious touch to every event. So the real question is….whichtype of orchid is your favorite and would you incorporate them into designs for your big day? In this blog, I’m going to discuss all things Cymbidium Orchids including their origin, known colors, meanings and some fun facts!

Cymbidiums first began to bloom in the forests of the Himalayas, growing in grounds that would soar up to 9,000 feet above sea level. The Himalayas were not the only mountainous region to be graced with these stunning plants. The Cymbidium Orchids were also naturally produced in China, Korea and Japan and eventually moved down into the south where they found more warmth and humidity. Ten years ago, I was once able to tour an Orchid farm in Bali and it was one of the most gorgeous farms I have ever been blessed to visit.

With over 40 variational species of the Cymbidium, they were soon bred in the greenhouses of Europe and became very popular in higher class societies. Owning or growing any type of Orchid was a sign of being upper class in California and Australia and many had their conservatories filled with the rare and beautiful Cymbidium Orchid.

The name Orchid carries many symbols differing per century and area of cultivation. Most cultures recognize an Orchid as the symbol of fertility and virility. It has been said in past centuries that even eating this bloom could help determine the sex of an unborn child. Also, the orchid has a meaning of luxury and deep affection. Receiving an Orchid in the Victorian Era meant that the giver had deep rooted and emotional feelings for you. They believed this because back then an Orchid was so rare that it was very difficult to find one (not to mention, very expensive once found). A pink orchid has always been known to convey pure affection but is also available in multiple colors to include white, orange, apricot, brown, red, burgundy, yellow, cream and green. The Orchid has a center stamen called “the throat”. This throat can be bred to come with a different yet complimentary color from the outside petals. Can you imagine a red Orchid with a green throat at a Winter Wedding?! Tre Chic!

Through my years of working with the Cymbidium Orchid I’ve learned a few fun facts that make this flower stand out from the rest! First, the size, shape and textures of the Cymbidium really vary depending on the habitat it was cultivated in. Orchids that bloom in a drier area produce thick leaves covered in a waxy like texture. However, Orchids that are produced in more humid areas have thinner and further elongated leaves. Second, these blooms actually produce millions of teeny tiny seeds, however only a few of these seeds will actually germinate and grow into a stunning floral. Third, Orchids have been used over the centuries in numerous industries, including; perfumes, spices and medicines!

So now that we are all Cymbidium Orchid experts, let’s talk about adding them into your wedding décor! Widely demanded in bridal bouquets, boutonierres and corsages, these gems actually hold up really well submerged under water in glass or crystal centerpieces! Have a specific color scheme in mind? Let’s find out if there’s an Orchid variety to match your color palette! Fill out your wedding questionnaire here and let’s chat!