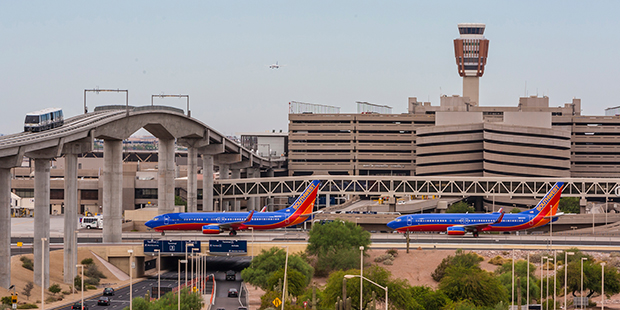 Travelers may soon be seeing even more blue, red and yellow planes at the airport.

Tom Nealon, the President of Southwest Airlines, announced these future endeavors alongside Phoenix Mayor Greg Stanton. By 2021, Southwest will occupy the eighth and final concourse at Terminal 4, adding an additional eight gates to serve valley travelers.

Currently, Southwest occupies three concourses at Terminal 4 and is one of Sky Harbor’s two largest carriers. In addition to increasing options and resources for frequent fliers, Southwest will also invest more than $40 million to expand the airline’s maintenance facility at Phoenix Sky Harbor. Southwest is doubling the number of maintenance bays from two to four, as well as adding a hangar to their Phoenix facilities.

This announcement reinforces the strong partnership between Southwest Airlines and Phoenix, and serves as a reminder that Sky Harbor is one of the busiest airports in the nation and a strong economic driver for the city and the region. Sky Harbor boasts a total economic impact of nearly $30 billion and support for over 240,000 jobs.