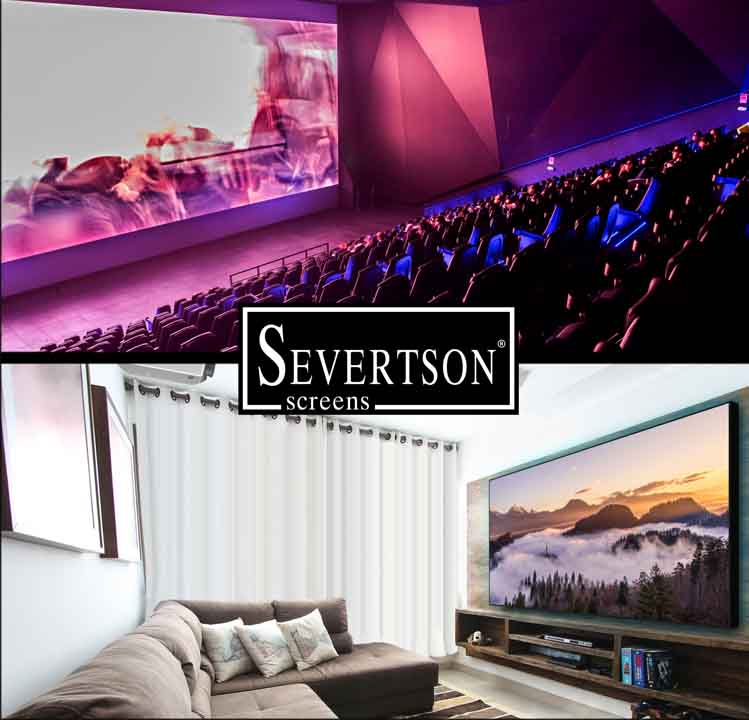 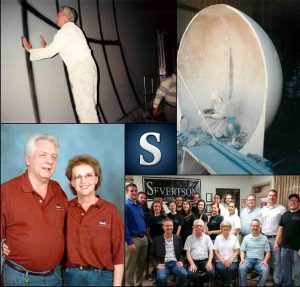 Mesa, Ariz., Sept. 29, 2016 – Severtson Screens, a global leader in innovative and quality projection screens for the commercial, home theater, cinema, and pro AV markets based in Mesa, Ariz., is pleased to announce it is celebrating its 30th anniversary.

“Severtson Corp. started in 1986, literally in our house,” explained Severtson Corp. founder Ron Severtson. “Better known now as our moniker ‘Severtson Screens’, our first job was with Arizona’s own Williams Air Force Base in response to the U.S. Air Force’s need to find both a quality optical coating and a uniform application process for the interior of their domed flight simulators.”

Working late each night in the family kitchen and backyard, Severtson not only solved the technical problem of uniformly coating a domed surface, he also created a product that had the reflective properties the Air Force needed for its simulator program to be successful.

“In the early 1990s, a contract with IMAX Corporation brought Severtson Corp. into the cinema screen industry,” Severtson continued. “To meet the challenge of the larger screens, a robotic application system was designed that could be used to coat screens on site. In 1998, Severtson Corp. applied its optical coatings to the world’s largest cinema screen (103 ft. x 129 ft.) in Sydney, Australia.”

In 2003, Severtson Corp. launched its own line of home theater/Pro AV screens with a basic fixed-frame screen. The company later expanded the line to include a screen for every need. Kirk Severtson, Severtson Corp. Vice President and CTO, explained, “By using the same optical coatings used on our large cinema screens, the home theater/Pro AV line delivers outstanding performance in both 2D and 3D formats.”

By 2009, Severtson Corp. became a full-service cinema screen manufacturer. Its low rejection rate coupled with the high quality of all its products has made Severtson Corp. the industry standard for quality and customer service worldwide.

“The combined experience of building small home theater screens and large cinema screens has given Severtson Corp. the expertise to meet the needs of the Pro AV market for both professional indoor applications as well as large outdoor venues,” Kirk Severston added.

Now, in 2016, Severtson Corp. continues to be a global leader in innovation and quality, including its new folded technologies for cinema screens. “Our new folded shipping method now makes international distribution of our industry-acclaimed SēVision 3D GX highly affordable, reducing international shipping costs by up to 70 percent,” explained Dan Maxwell, Vice President and COO of Severtson Corp.’s Cinema division. “Besides standard perforated white and sliver screens, we now also offer the immensely popular microperf option to the folded SēVision 3D GX line of cinema projection screens for international shipment. Since its recent launch, we’ve had to renovate our facility and upgrade our machinery to keep up with worldwide demand.”

Added Toby Severtson, Severtson Corp. President & CEO, “We are proud to serve the home theater and commercial markets with the same service and quality that has taken the cinema market by storm and cemented us as the industry leader. With our screens proudly Made in the USA, we are uniquely equipped to cater to the specific needs of all of our customers worldwide. We are proud of our history, and we look forward to the next 30 years.”

With its three Arizona-based production facilities and its state-of-the-art robotic application system, Severtson has massive production capabilities and an unusually wide array of screens. The screens range in size from massive movie theaters, comfortable home theaters, and everything in between.

Mesa, Ariz.-based Severtson Corporation, which is celebrating its 30th anniversary in 2016, is an award-winning global leader in innovative and quality projection screens in the home theater, pro AV, and cinema markets. Its low rejection rate coupled with the high quality of all its products has made Severtson Corp. the industry standard for quality and customer service worldwide.

From its unlikely origins in the family kitchen to today’s three modern production facilities, Severtson Corp. has remained committed to the principles of innovation and uncompromising quality that have made them who they are today.