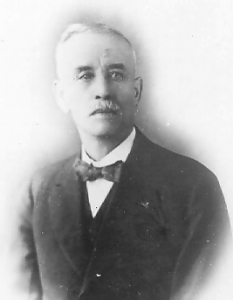 Originally published March 19, 2010 – Back on February 19th I wrote about a remarkable piece of Tempe history that has long been hidden away and was being prepared to exhibit for the first time in the newly renovated gallery in the Tempe History Museum.

Within its pages are the first ordinances adopted by the Tempe Town Council and transcribed by hand onto the volume’s oversized pages.

It begins with the first ordinance incorporating and officially naming Tempe in November 1894.

That got me wondering about the man behind the signature.

His father, Jeffrey Brown a ship’s captain from Maine sailed into San Francisco Bay at the start of the Gold Rush in 1848. There he met and wedded Bertha Braza.

Little is known about Brown’s early years. But by the time he was a young man, Samuel Brown had arrived in Los Angeles where he spent five years apprenticed to a blacksmith.

In 1878, at age 26, Brown had made his way to Tempe where he immediately began working for Charles Trumbull Hayden.

Ambitious and entrepreneurial, Brown started his own blacksmith shop on the corner of 6th and Mill in 1883 ─ the same year he built a handsome two-room adobe home with a well-shaded wrap-around veranda on Ash Street. He lived in the house until 1901.

Today, just south of Tempe Fire Station #6 on Ash Avenue, the Brown-Strong-Reeves House has been restored as an architect’s office.

Later he would partner with Alejandro Moraga in a blacksmith shop at 7th Street and Ash. Along the way Brown also owned and operated a tavern.

Along with his various enterprises, Brown became engaged in the community where, according to research at the Tempe History Museum, he became “…actively involved in local and territorial politics”.

When his fellow Council members elevated him in 1902, Brown became Tempe’s only Hispanic mayor ─ a position he held before resigning in May 1903 to become Tempe Town Marshall for the next nine years.

During his tenure as Marshall, Samuel Brown was involved in the recovery of Caroline Sheehan, a 12-year-old girl who was abducted by her mother from the (Florence) Crittenton Home in Phoenix on December 15, 1909.

After reading about the kidnapping in the Arizona Republican, a local resident who thought she spotted the pair, alerted authorities. Maricopa County Sheriff Carl Hayden asked Brown to be on the look-out.

Two days after the abduction, the remarkable Brown managed to capture the pair and return the young girl back to the foster home.