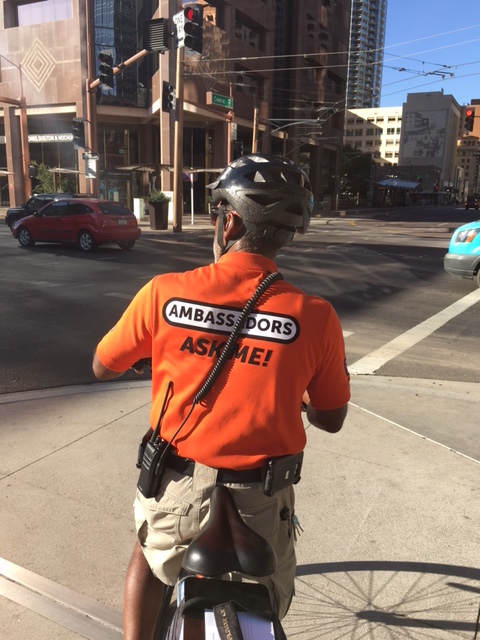 Wearing a bright orange shirt, with a large “Ask me” pin, the Downtown Phoenix Ambassadors are hard to miss. They market all that Downtown has to offer while also keeping it a safe environment in which to live, study and visit.

The Downtown Phoenix Ambassadors have made it their goal to make the city a vibrant destination where citizens and tourists feel safe. The ambassadors preside over a 90-square-block core of Downtown Phoenix, which includes ASU’s campus and extends from Fillmore to south of Jackson Street, Seventh street to Third avenue. They offer a service called “Pal Arounds”, where an ambassador will walk someone safely to any destination within the 90-square-block area.

“We are the eyes and ears of Downtown,” said Chris Spahle, a Downtown Ambassador outreach coordinator.

There is not a lack of enforcement Downtown because there is a large overlap between the ASU police, the Phoenix police, various buildings’ security staff and the Downtown Phoenix Ambassadors, Spahle said. As Phoenix continues to grow it is paramount that all entities communicate with each other regarding crime trends or individuals that seem suspicious in the area.

A surge in Downtown Phoenix development over the last five years includes more than $4 billion invested in office and convention space, educational facilities, hotel rooms, restaurants and retail, according to the city of Phoenix. Dramatic growth provides opportunity and not always the best kind.

“Just as businesses look for opportunity so do criminals,” said Spahle. Stakeholders need to work together to create deterrents to crime, he said.

In order to avoid becoming a victim of crime in Phoenix, Spahle advises to always stay in a crowd, only walk in well-lit areas and, most importantly, always stay aware. People who are absorbed in their phones, or are listening to music, easily become distracted and unaware of a potential predator. Wearing ear buds is equivalent to having a bullseye on your back.

Extra precautions have been taken to ensure Phoenix is a safe place. When the Super Bowl was hosted in Phoenix a year ago, surveillance cameras were generously dispersed throughout Downtown and have remained in place.

“It would be hard to commit a crime and not be caught on camera,” Spahle added.

The ASU Safety Escort Service adds another layer of safety to Downtown and operates 24/7, 365 days a year. Students walking across campus to a car or residential hall can ask for an escort to accompany them, ASU Police Commander William Orr said. It is specific to ASU students and the service only operates within the confines of the campus boundaries. Policy changes have forced ASU Police officers to strictly enforce this rule.

In addition to the safety escort service, ASU police strive to keep students safe by providing other resources such as free self-defense classes. Commander Orr also encourages students to download the Life Safe App, an app that allows students to text dispatch directly and send dispatch video, audio and pictures to detail a suspicious person or scene. Students can also allow their parents or other loved ones to track their route as they go from point A to point B. This tracking device can be disabled once the individual has safely arrived at their location.

Still, some ASU students say not enough is being done to make Downtown Phoenix a safe place to live and study. “I don’t feel comfortable walking around Downtown at night, not by myself and not with a group,” said Sophia Molinar, an ASU journalism student.

Molinar, who lives in the ASU Downtown dorm, said she has noticed that the law enforcement and public safety officials usually convene on the same streets leaving many other streets void of vigilance.

“As long as you’re in a very specific area of Downtown you are safe but as soon as you leave that central hub you’re not, ” Molinar said.

However, in surveys conducted by Visit Phoenix, “Phoenix scores very high with convention attendees on safety and cleanliness,” the senior Director of Marketing & Communications at Visitphoenix.com, Scott Dunn said. He praised the Downtown Phoenix Ambassadors as contributors to the success of the surveys.

As Downtown continues to grow, there are less vacant areas and more pedestrians populating the streets. An increase in businesses, festivals and events that attract more people to Downtown eliminate empty areas where criminals could commit a violent crime.

“A vibrant downtown is almost a safety guard within itself,” Spahle said.

Safety officials says it takes everybody working together to combat crime and strongly encourage citizens, including students, to report anything that seems odd, noting that a small tip can go a long way. No matter what crime statistics are reported about a city and no matter the amount of public safety officials that preside over an area, remember to, “always be aware of your surroundings,” Spahle said.