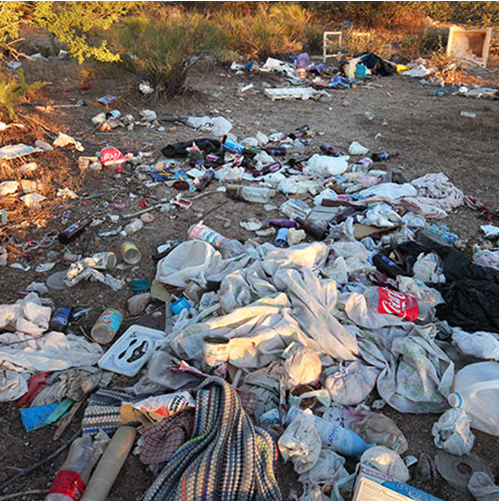 The city of Phoenix faces an environmental problem of illegal dumping, the act of people disposing of waste in unauthorized places, and it’s a problem that is costing Arizona residents millions of dollars and has health implications.

“Disposal of solid waste at any location that has not been approved by an authorized agency to accept waste is illegal,” according to the Arizona Department of Environmental Quality (ADEQ).

The ADEQ also lists some effects of illegal dumping which includes posing a risk to public health, aquatic habitats, and wildlife; attraction rodents and other animals; hatching in water by insects that carry diseases such as mosquitoes; growth of bacteria in discarded food, diapers and human waste; and the contamination of water and soil by hazardous chemicals.

Apart from causing health problems, illegal dumping has negative economic effects. Funds that could be used for other developmental projects are used by the local government to organize clean up exercises. “It costs more than $3 million to pick up litters from roadways,” said Kelly Taft, communications manager for Maricopa Association of Governments.

Examples of approved sites for waste disposal are waste transfer stations and landfills, which are inspected every year to ensure a healthy place to dispose of waste.

An example of illegal dumping is open dumping or midnight dumping. The Maricopa County Waste Resources and Recycling defines open dumping as the disposal or storage of regulated solid waste such as household garbage, appliances, furniture, hazardous waste, tires, yard waste and construction and demolition debris in a location other than a landfill, waste transfer station, recycling center or local curbside waste management provider.

In a litter survey conducted by Don’t Trash Arizona in 2015, nearly half (45 percent) of residents who indicated they littered in the past year reported they did so while driving or riding in a vehicle.

Don’t Trash Arizona, in conjunction with the Maricopa Association of Governments (MAG) and the Arizona Department of Transportation (ADOT), addresses freeway littering and its effects in Phoenix through sweeping, litter pickup and litter education.

The ADEQ, in its mission to protect and enhance public health and the environment in Arizona, coordinates with local officials and responds to complaints. “We investigate to determine parties responsible and take enforcement action to require cleanup by the responsible party- the responsible party, through enforcement, funds the cleanup,” said Caroline Oppleman, public information officer for the Arizona Department of Environmental Quality, in an email interview.

She also said in the interview that the ADEQ provides cleanup resources through its Brownfields, Voluntary Remediation Program and Water Quality Assurance Revolving Fund programs.