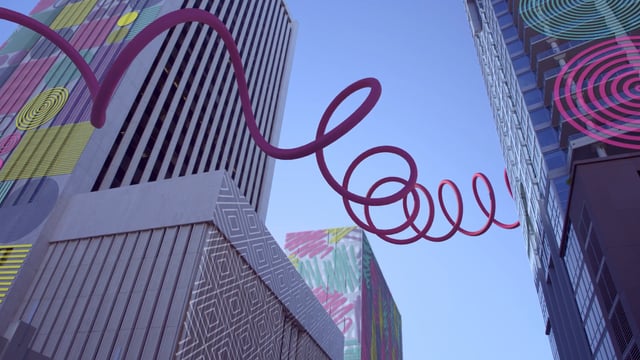 Method + Madness. On a surface level, the words are polar opposites, but combined, they spark creativity and ingenuity. It’s the lifeblood of the design community. We thrive on this chaotic harmony to produce ideas with impact.

It’s only fitting that Method + Madness is the title of Phoenix Design Week.

To show our appreciation to the design community, we created and produced the conference’s title sequence.

Standing judgement to the state’s finest creative minds, under the microscope from a slew of national panel and keynote speakers, this film needed to do a lot. It needed to motivate, inspire, rouse a crowd and hype the kickoff of AIGA Arizona’s flagship event.

Flux represents a lot of things. Individually we are in a state of flux. Collectively, and as an industry, our work is ever-changing. With this in mind, we wanted to depict Phoenix in flux. It was an opportunity to showcase our hometown, to flaunt it before the conference’s national visitors and to incite pride for the city that has become so dynamic.

With no barriers and few guidelines, we let our creative freedom run mad.”

With no barriers and few guidelines, we let our creative freedom run mad. So we made a film – a cinematic one interlaced with 3D visual effects.

Creating this film itself was a manifestation of Method + Madness.

You can enjoy this film on a surface level, but we wanted something with depth. A real meaning. A story being told.

Promoting Phoenix as a city in flux happened organically. We saw what we liked between the streets and sidewalks and captured it on camera. Each environment spoke to us, and our goal was to capture it in a way that it speaks for itself.

Take the film for what it is – a hype piece – or dissect the composition, and break it down shot-by-shot. You’ll see each scene fits into Method or Madness.

Look for the cues. Every shot depicting Method was shot on a camera gimbal and slider – smooth, organized, stable. Madness was conveyed with a handheld camera shot at 60 frames per second to evoke more human and natural movement. There is iconic architecture peppered around Phoenix, but we weren’t concerned with rooting viewers in a geographic location. Because of this, they are freed to explore their surroundings.

We wanted to show the city through a different lens. Even with a backdrop as dynamic as Phoenix’s urban core, people walk the streets with their faces down, eyes lit up by a sea of LEDs. So we tilted the lens up and turned their gaze to the rooftops.

Low camera angles draw attention to leading lines and accentuate the architectural forms. Framing around an open sky evokes a sense of limitless.

Through this, we are telling the story of Phoenix. We’re not a traditional design hub, and we don’t want to be. We’re not New York, Los Angeles or Chicago…”

Through this, we are telling the story of Phoenix. We’re not a traditional design hub, and we don’t want to be. We’re not New York, Los Angeles or Chicago, and we’ve grown our own culture – grounded in the fundamentals, but spiked with a splash of the Southwest’s rebellious nature. Each shot was a canvas for the 3D team to experiment with. At each location, filmmakers turned to animators and asked “What can you do with this?” A shot flooded with sky or a stark building side became a blank slate.

So they used it. Fractal forms and geometric shapes take over the frame with effects that illustrate the frenetic energy of Phoenix in flux.

It ties scenes together and bends the bar separating the physical and digital.

Watch Method + Madness come together through Phoenix in flux.