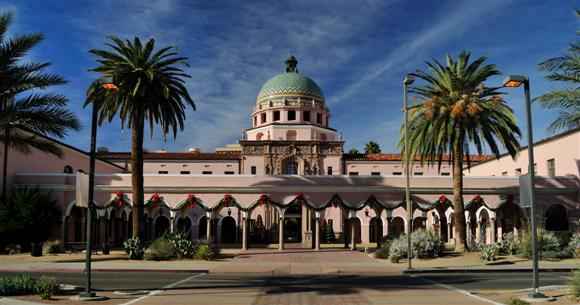 Changes are coming to the appearance of the Old Pima County courthouse.

The historic landmark building will be repainted, but the new color will actually match the shade of adobe that the original architect, designer and owner selected in 1929 when the building was constructed.

This was achieved after contractors working on the rehabilitation project uncovered the original shade of adobe and samples were taken.

This new paint will reflect the builder’s original intentions for the building, which was built in 1929 for a cost of $300,000. The building is listed in the National Register of Historic Places.

The Courthouse is known for it’s “Old Pima Pink” shade, which resulted after the original red and yellow paint faded. The paint was matched to the faded color, not the original, making the building more pink with each new coat that was applied over the years.

The original color is an important contribution to the historic character of the building, which was originally designed by Tucson architect Roy Place.

During the ongoing rehabilitation project, contractors have made several discoveries in addition to the original paint color. The famous Dillinger Courtroom, which remains intact as it was in the 1930s, is actually bigger than it’s current display, and a new project will restore it to its true size and dimensions.

The restoration and updated paint color are expected to be completed by May 2017, and are being funded by leftover money from other projects that were done under budget.