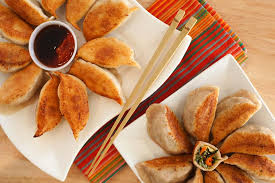 I’m not usually the one to write semi-bad reviews on restaurants, as I only intend to visit the places that I love and write about those. But last night was an experience unlike anything I’ve had before especially because it started so well but ended not too hot…

The evening starts with some friends and kicking off the evening with some tunes, a cheese plate and some vino prior to our departure down the street to Vanessa’s Dumplings in  Chinatown. Having been to Vanessa’s a few times over the 3 years I’ve lived in this neighborhood, it was a leisurely and lovely stroll just about 4 blocks away and the weather was quite a perfect temp. Once arriving at the restaurant all of my friends and I decided we would order a variety of items ranging from $2.00 – $2.75. A full breakdown for the order happened like this:

After waiting around 15-20 minutes we packed up our food and headed out to picnic down the street at some open park tables. Once settled we dove into the meal and after a few bits, we realized that the food was in-fact, not hot at all – even though it had come “right off the grill” or so we thought. Basically all of the dumplings were just about room temperature but no one decided that maybe we shouldn’t continue on our dumpling journey so we ate more. Having also been a frequent visitor of this joint I didn’t think much about it in terms of the food not being cooked enough or why it wouldn’t be hot after coming off the grill – and having seen them take the dumplings off the frying grill. Overall the food was tasty and the sauces are always the perfect addition to any menu item so we didn’t think twice about it. After getting home and settling down, my stomach started to hurt just a tad but didn’t think much of it besides just being full. Little did I know though  that later that evening I was going to be sick throughout the night.

Being that I do enjoy the food that Vanessa’s Dumplings makes as well as the history behind the establishment – I was extremely disappointed in this experience (to say the least). I wouldn’t say “never frequent this place again” but I would add to be careful of what you are eating and if you have a feeling that something may be off – always double-check.  What’s the takeaway here? If you’re even a bit hesitant on whether or not your food has been cooked fully, whether the temperature is off or you are a bit curious to why it’s chewier – always double-check or else you’ll end up like me head over in a toilet.

© My Local News US LLC - All rights reserved