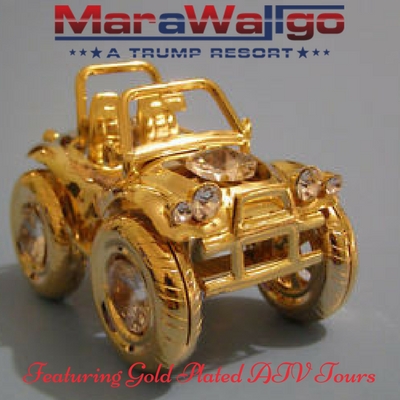 As President Donald Trump prepares to open his flagship border resort, Mar-a-Wallgo, hundreds have already signed up for the hotel’s expansive tour and excursion packages, which promise a rich outdoor experience in the Sonoran wilds.

“I just can’t wait to get my hands on one of them gold-plated ATV’s,” said Benson McGillicutty, a 52-year-old coal lobbyist from Atlanta, Georgia. “All that desert ain’t gonna look the same once I done tore it up.”

“They’re just rubber bullets,” said Bad Hambre spokesman Harlan Birch. “So no fatalities, we’re pretty sure. But we’re not worried about it. Most of these actors are too mired in student debt to afford a lawyer, and they’re all independent contractors anyway. Hell, I don’t even plan on paying ’em.”

When Birch was asked why he named the Border Patrol Experience “Bad Hambre,” meaning “bad hunger,” instead of “Bad Hombre,” meaning “bad man,” Birch shrugged and said, “Shucks, I don’t talk Mexican. And luckily, none of our customers will, either.”

“It’s a gig,” said Frank Smith, a 23-year-old graduate of Juilliard’s acting conservatory. “I’d already had a guest spot on ‘Law & Order: SVU,’ but I spent my residuals on rent and basic cable. My agent said I should diversify my résumé. It’s better than dishwashing. Although it sucks having to buy my own bottled water from the resort.”

The simulation will supply participants with GPS devices, assault rifles, flash grenades, and a generous ration of beef jerky and Coors Lite. Cigar smoking will be discouraged during high winds.

“It’s gonna be good, old-fashioned fun,” laughed Birch. “Last time I enjoyed myself so much, I was in Tijuana.”