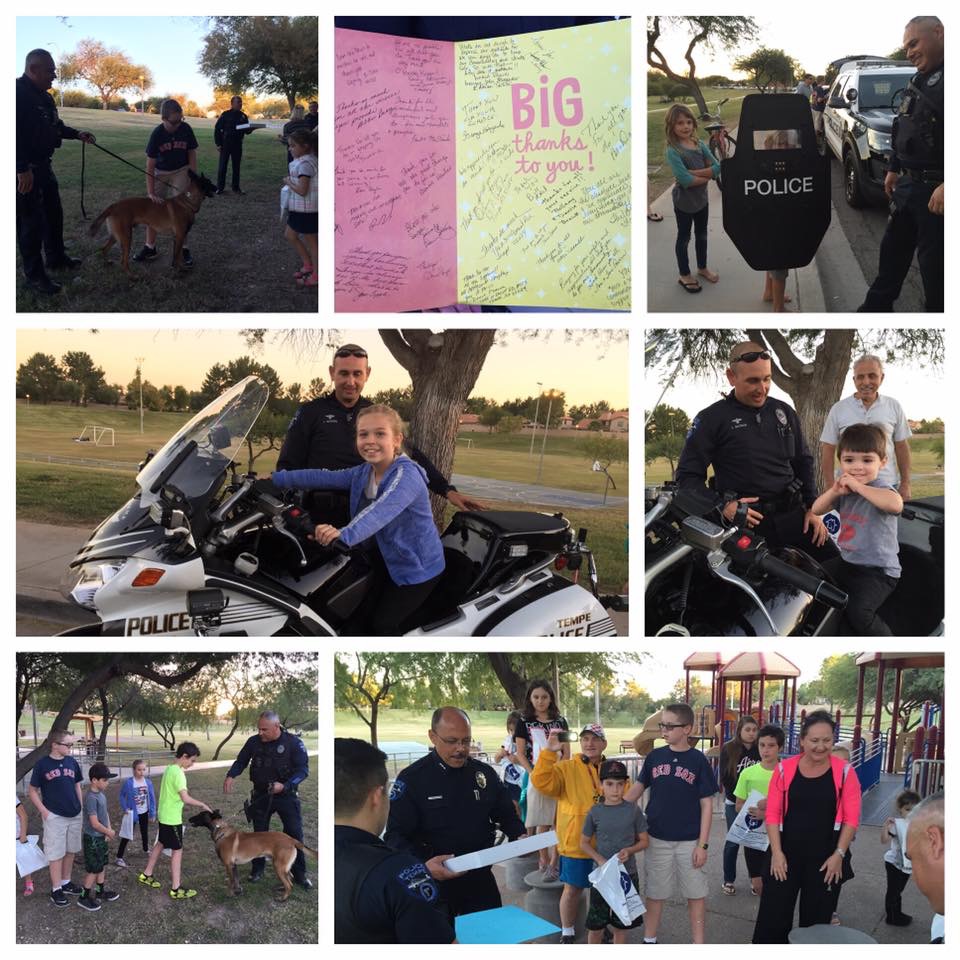 The Look2Brooke realtor group held a neighborhood-wide potluck in October at Warner Ranch as part of the Tempe initiative of Getting Arizona Involved in  Neighborhoods (GAIN). At the event, children in the community had a lemonade stand raising money for the Tempe Public Safety Memorial. This memorial is set to  honor the Tempe firefighters, police officers, and canines that have lost their lives in  the line of duty – working to improve and save those in the Tempe area. The children worked hard and cared deeply about helping to honor and thank all of  those who have worked to protect their neighborhood. Tempe is the only city in the valley to not have such a memorial.

The Tempe Police Department gave a kind surprise to show their thanks for raising money. The police department worked with the parents of the children of the lemonade stand to come up with the ultimate generous surprise. The kids were surprised with a number of police vehicles, a motorcycle officer, and even a police dog. Each child that participated in raising money with the lemonade stand received goodie bags as well. The children were extremely excited! The Tempe PD went above and beyond in their generosity and outreach for this small group of children.

The Look2Brooke Group decided that it was important to thank these officers for going above and beyond to show their appreciation for what the children had done. The Look2Brooke Group is thankful to see the police department and community coming together to show their generosity and thoughtfulness. To show just how important this all was for the community, and to give the biggest thanks possible, the Realtors on the team decided to take a few steps to make a fun surprise.

A big thank you card was given to the officers, signed by the neighbors in the community served, thankful for the Tempe Police Department. Look2Brooke Group knew this was simply not enough to prove to the department just how valuable the work of the officers had been and always continues to be. It was decided that the police department deserved some tasty treats for the great things they have done. The Donut Parlor donated a dozen donuts for the department, lots of pizza, and even a personalized cake was donated to show thanks. The officers were incredibly surprised and delighted to receive such a heart-warming thank you. It was truly a night of surprises.
Look2Brooke Group is happy to be a driving force for such a community wide experience of joy and kindness where families and neighbors could connect and surprise each other, showing the true generosity and love in the area. At the Look2Brooke Group, community is important, and any opportunity to see the neighborhood come together is a top priority! Bringing the neighborhood together to thank the police department was the least that could be done – the Tempe Police Department deserves to be honored and thanked for all their hard work all year long!