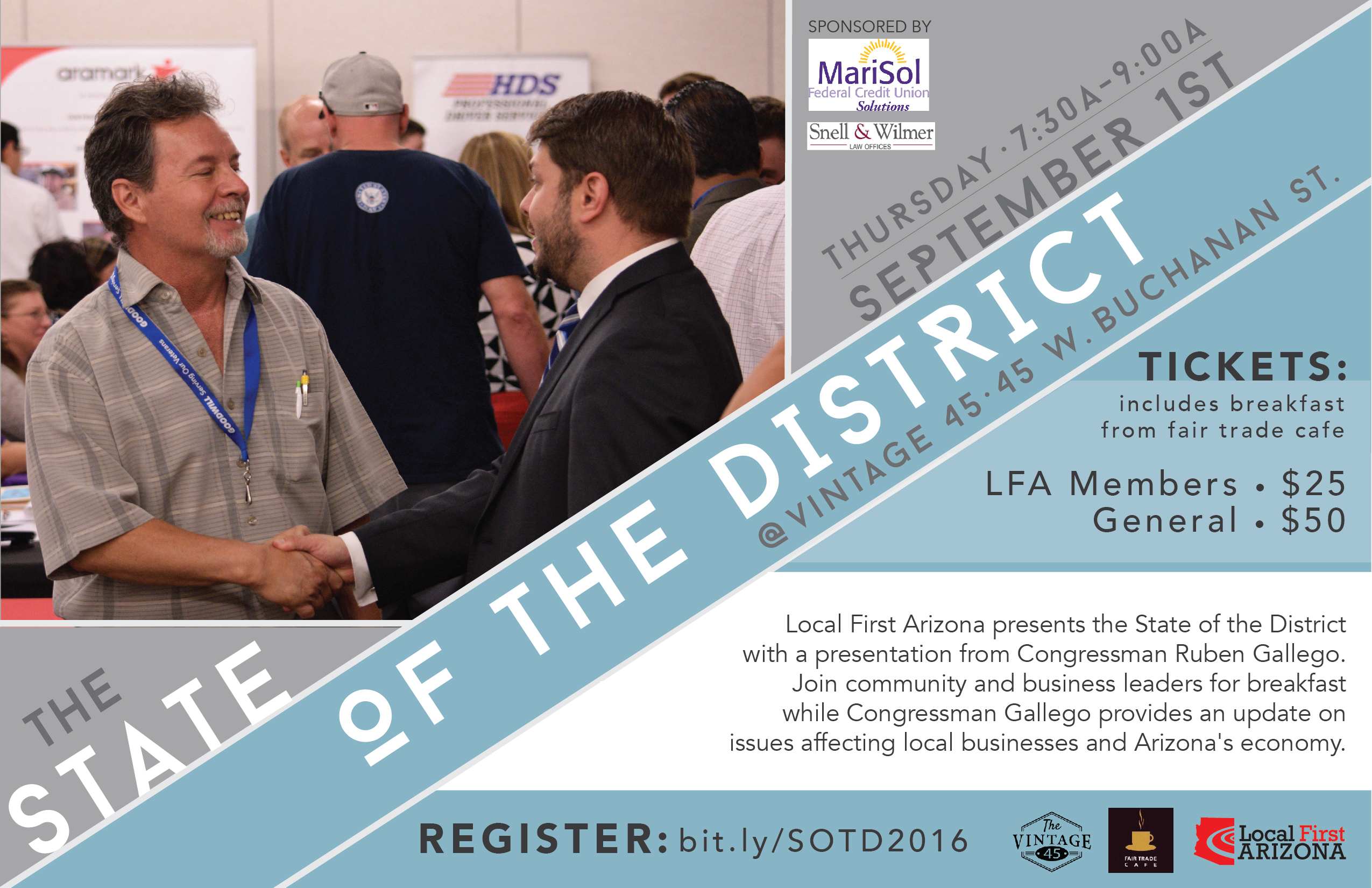 Local First Arizona is presenting its first “State of the District” event on September 1, 2016, at 7:30 AM at The Vintage 45 in Phoenix with Congressman Gallego as the keynote speaker. Presented by MariSol Federal Credit Union, “State of the District: An Update from Congressman Ruben Gallego” will bring together business leaders and advocates from around the Valley to hear a presentation from Congressman Gallego on updates at the federal level relating to local businesses.

“We thought this kind of event would be a great opportunity to shine a spotlight on local businesses’ priorities in Congress,” said Kimber Lanning, Founder and Director of Local First Arizona. “Congressman Gallego has already been a strong supporter of our work to empower Latino business owners through our Fuerza Local programs, and we are eager to hear from him about the work he is doing in Washington, D.C., to advance the interests of local business owners throughout Congressional District 7 and Arizona.”

Congressman Gallego, elected to the U.S. House of Representatives in 2014, says he first became interested in Local First Arizona because of how the organization represents businesses like those in his district. “Congressional District 7 is home to many family-owned local businesses, the types of businesses that our economy depends on for widespread prosperity,” said Congressman Gallego. “What Local First Arizona is doing to support these businesses is crucial to Arizona’s economic growth, especially for Arizonans living and working in my district.”

Local First Arizona represents nearly 3,000 local businesses across the state, many of which are in Phoenix and within Congressman Gallego’s district. “Our Local Business Coalition members frequently depend on us to act as a collective voice to speak out on matters that are important to them,” said Lanning. “It’s important for local businesses to be able to communicate with their elected representatives, and that’s what we hope to achieve here. We look forward to hosting similar events in the future.”

The event is $50 to attend, and includes a light breakfast catered by Fair Trade Cafe. Active members of Local First Arizona can attend at a discounted rate of $25. Event registration is available at https://www.eventbrite.com/e/state-of-the-district-an-update-from-congressman-ruben-gallego-tickets-26880320763.

State of the District: An Update from Congressman Ruben Gallego
Thursday, September 1 at 7:30 AM – 9 AM
The Vintage 45, 45 W Buchanan St, Phoenix, Arizona 85003
$50 for general admission, $25 for active members of Local First Arizona’s Local Business Coalition. A light breakfast catered by Fair Trade Cafe is included with registration.

Congressman Ruben Gallego is the son of Hispanic immigrants, a veteran, and a community leader. He was the first in his family to attend college, graduating from Harvard University with a degree in International Relations. He later joined the Marine Corps, serving in Iraq with the well-known combat unit Lima 3/25. Congressman Gallego was elected to the Arizona House of Representatives in 2010, and served until 2014. He represented District 27, which covers much of Phoenix. He rose quickly in the state legislature, serving as Assistant Minority Leader. Congressman Gallego became known for his tough stand against extreme legislation pushed by Republicans in the state legislature. He led the opposition to the discriminatory SB 1062, which Governor Jan Brewer ultimately vetoed. As a state legislator, Congressman Gallego also led the push for Medicaid expansion and to secure in-state tuition for veterans. During his first term, Congressman Gallego has fought tirelessly on issues including education, job creation, access to higher education, veterans’ issues, and immigration reform. Making Arizona a better place to live, work and raise a family is his top priority. In his first year in Congress, Congressman Gallego introduced the VETS Act, which would reduce the burden of student loan debt on veterans and has supported legislation to increase the hiring of veterans and provide additional benefits to wounded or deceased veterans and their families. Congressman Gallego helped lead the effort to strengthen and restore the Voting Rights Act in order to ensure that all Americans have access to the ballot box. He also authored legislation to encourage gun dealers to be stronger community partners in the struggle against gun violence and to crack down on irresponsible gun dealers. Congressman Gallego serves as a Senior Whip for the Democratic Caucus, the Whip of the Congressional Hispanic Caucus, Vice Chair of the Congressional Progressive Caucus, and Vice-Chair of the Equality Caucus.