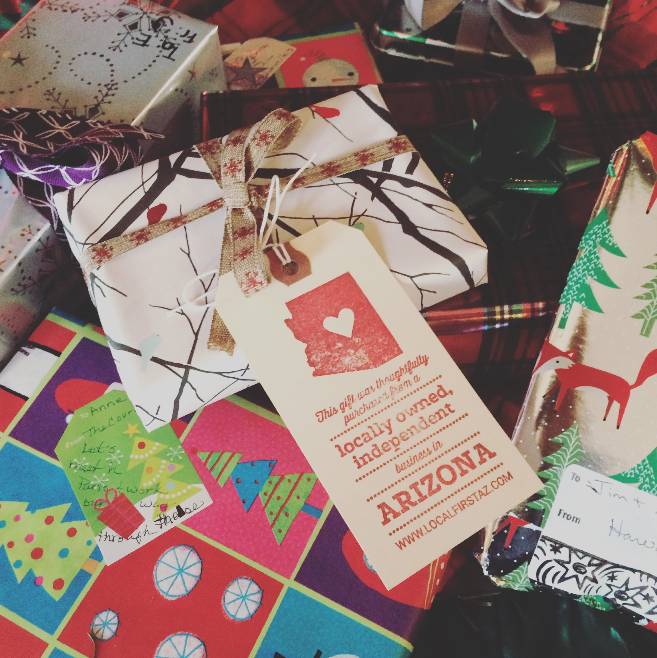 This holiday season, Americans are expected to spend more than $650 billion on gifts, food, celebrations, and other holiday needs. When considering the effects of this spending on the local economy and community, Local First Arizona suggests that holiday shoppers may want to check their lists twice and think more critically about where they are spending their money.

“Arizonans should recognize that where they spend their money has a much greater impact on their community and well being than they might expect,” said Kimber Lanning, Founder and Director of Local First Arizona (LFA). “Up to four times more money stays in the local economy when those dollars are spent with a local businesses rather than a national chain or global online retailer.”

“For those who are looking to make a difference this holiday season, as well as into the new year, Arizonans can have the greatest impact by shifting their holiday spending to local businesses and away from national big box and mega online retailers,” said Lanning. “By keeping our dollars in Arizona, we take control of our state’s economic future through supporting our fellow neighbors in creating entrepreneurial opportunities and jobs in our local communities.”

Local First Arizona defines a local business as one that is privately owned and headquartered in Arizona. If the business has multiple locations, a majority of the locations must be in Arizona. In essence, most of the money that goes through the business should stay within or end up in Arizona’s local economy.

Holiday shoppers can visit the LFA website at localfirstaz.com/buy-local for a continuously updated list of holiday shopping events; gift ideas; offers and discounts from local businesses for Black Friday, Cyber Monday, and the ongoing holiday season; plus much more. Shoppers can also visit the Local First Arizona online directory of nearly 3,000 local businesses across Arizona at localfirstaz.com/directory. Arizonans can also follow Local First Arizona on social media for the latest updates from the campaign.

“This campaign is not just about the boutiques and small mom-and-pop shops, but about building an Arizona economy that works for everyone,” said Lanning. “By keeping our dollars local, we invest in an Arizona in which all Arizonans can prosper, and that we’re all proud to call home.”