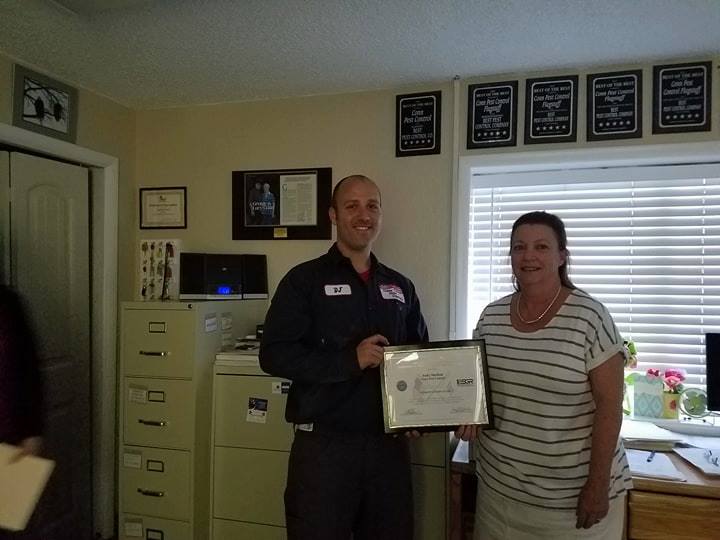 A beloved local business owner has been recognised for her inspiring actions and attitudes in the workplace.

Judy Shelton, owner of Conn Pest Control, recently received the Patriot Award from the Department of Defense. The honor was presented by National Guard member David “DJ” Menotti and Flagstaff mayor Coral Evans. Menotti wanted to give Shelton a huge thank you for allowing him to keep his job and looking out for his family while he was away on active duty.

Shelton received the Employer Support of the Guard and Reserve award because, according to Menotti, she had helped him transition back into civilian life and lent a hand during his most recent tour with the Air Force to Kuwait. Shelton went above and beyond to make sure she and her entire staff stepped up to the plate to take care of the Menotti family while he was away.

Menotti spent nine years in the Air Force before he made the transition to civilian life. He was easily accepted to join the team at Conn Pest Control, thanks in large part to Judy, who made the move to Flagstaff and the move back to civilian employment much more manageable.

However, six months after Menotti had been on the job, he received word of his fourth deployment. Although he was worried about telling Judy, he had no reason to be: she told him not to worry and started to brainstorm ways her team could help his family while he was away for nearly 200 days.

Not only did Menotti never need to stress about losing his job, but Shelton arranged for different employees to help his wife with housework and childcare.

Mayor Coral Evans, whose father was in the Air Force, also extended a warm thank you to Shelton.