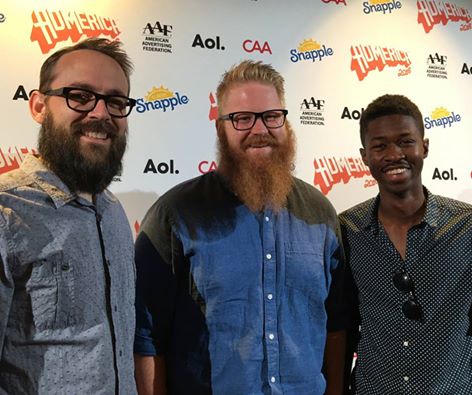 Kitchen Sink Studios earns national film award from American Advertising Federation
Kitchen Sink Studios took home a Silver ADDY at the 2016 National ADDYs Tuesday evening in Anaheim, California, at the American Advertising Awards, known as the most prestigious advertising competition in the United States.
The awards, conducted by the American Advertising Federation, receive more than 40,000 submissions a year from top creative agencies all over the nation. We are proud and honored that our film was singled out and recognized as one of the best.
The Silver ADDY was given to us in the film category of Elements of Advertising for cinematography. This film was part of an expansive branding campaign for Huxton, an American cannabis company.
It is the fine details within the film, like subtle sound design and film techniques, that heighten the footage beyond a traditional branded film. Through those subtleties and differentiators, we created a lasting touchpoint that mirrored all Huxton stands for.
We shot the film at 120 frames per second to complement the serenity of the environments. This technique enhanced the film’s emotion of limitless, ease and euphoria. While the film runs less than a minute and a half, the feeling lingers much longer.
The film was one component of our overall Huxton campaign; other aspects included naming, branding, identity, copywriting and website design and development. All campaign elements worked harmoniously to convey the brand message effectively and honestly.
Huxton serves as a tangible demonstration of how a holistic approach to a brand has the power to distinguish it within its industry. Since 1999, our agency has elevated brands across industries including development, restaurant, education and retail. Each of our clients are given the caliber of care worthy of an ADDY award.
View the film: https://vimeo.com/kitchensink/huxtonusa
See our other branding efforts and learn more about our agency: www.KitchenSinkStudios.com