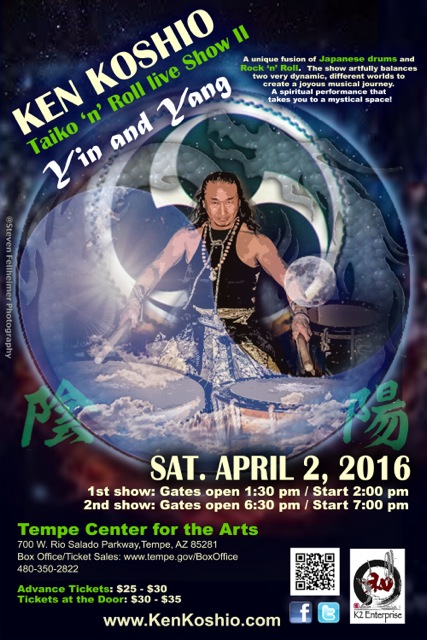 Come join Ken Koshio & his band – for Taiko ‘n’ Roll Live Show II presenting a unique fusion of Japanese drums with Rock ‘n’ Roll to create – a not to be missed, universal celebration of peace, balance and harmony.
The first Taiko ‘n’ Roll Live Show last June was a big success, tickets completely sold out! Audiences commented they could feel the soul and energy throughout this masterpiece of performance art.

The theme of this second show artfully balances the unifying elements of two very different cultures, Japanese TAIKO drumming (east) and Rock ‘n’ Roll (west) which creates a joyous musical journey. Since ancient times, Taiko rhythms set the heartbeat in motion, expressing the melodies and pulse of mother earth. When combined with Rock ‘n’ Roll, the experience is unforgettable; this unique performance will transport you into a mystical space.

Ken Koshio is a world class Japanese Taiko drummer. Taiko is a Japanese style of percussion, which combines music, movement and spirit. Ken pushes the boundaries of Taiko through various collaborations, creating a totally authentic and unique style of music. It is truly an amazing and powerful production and the most exciting performance you will see this year.

Ken’s musical destiny began in Nagoya, Japan. Influenced by rock music during his formative years, he sang and played guitar. At the age of 28, Ken migrated to the United States to pursue his dream to develop his voice and instrumentation in a broad musical setting. His humble beginning as a street performer in Japan and the U.S refined his natural gifts. Ken continues to perform throughout Japan annually.

In 2004, Ken settled in Phoenix and began playing Japanese music. It was here Ken explored the spiritual origins of his Japanese heritage and began blending those roots with his love for American blues, folk, and rock music. This passion heavily influenced his musical compilations and as a result, Ken Koshio is a truly remarkable performing artist.

The best seats in the house, in the front of Balcony One, are available as a Premium VIP package ($95) at the 7:00pm show. These seats include:
-Premium seating
-Enjoy the VIP room before the show (5:30pm – 7:00pm)
-Meet and greet with Ken Koshio
-Photo & Autograph opportunity
-Light meal (Hors-d’oeuvres)
-T-shirt
-CD
-Origami cranes
-Free First Taiko trial class
-and more!