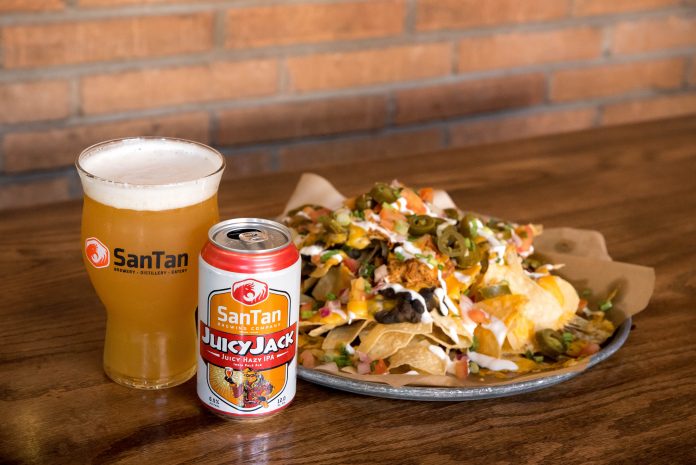 Three, two one, action! SanTan Brewing Company in Downtown Chandler is here to save your taste buds from hoppy bitterness with Juicy Jack IPA – hazy, tropical, fragrant and full of adventure. Juicy Hazy IPA showcases Mosaic and Cashmere hops which explode with aromas of peach, guava and tangerine. Fruity and juicy, a generous amount of oats are added to give Juicy Jack a rich, full bodied flavor. 6.5% ABV, 37 IBU.

“We’re always experimenting with new brewing processes that utilize the full flavor and aroma of Cashmere Hops without any of the intense bitterness of traditional IPAs. By adding blonde roasted oats to the grain bill we get a tremendously smooth mouthfeel that bursts with tropical fruity flavors,” said Anthony Canecchia, founder and brewmaster, SanTan Brewing Company.

Canecchia is well known for creating fun action-adventure personas to represent his brands including Mr. Pineapple, Sex Panther, MoonJuice and Otto – the Oktoberfest mascot. This time, Juicy Jack is the IPA you want to take with you on an adventure. Indiana Jones meets Star-Lord as illustrated in the can design, this Juicy Hazy IPA is ready to jump off the shelf and right into your next adventure.

“We’ve seen some hop fatigue happening out there. Fans of the flavor and aroma of IPA’s will really enjoy this brew without the high ABV and bitterness of a traditional IPA.

Cashmere and Mosaic hops are added at very specific times and temperatures late in the brew. As with all of our brands, Juicy Jack is brewed with love,” continued Canecchia.

To locate a can or pint of any SanTan Brew near you, visit https://santanbrewing.com/beer-finder.

Open since 2007 under the leadership of founder and brewmaster, Anthony Canecchia, SanTan Brewing Company has established a strong reputation as Arizona’s favorite craft brewery. SanTan’s award-winning brews are available throughout Arizona, including at its friendly neighborhood pubs in Downtown Chandler, Uptown Phoenix and Sky Harbor International Airport. In 2015, SanTan began distilling with a mission to create flavors for the 21st century and to reimagine what spirits could be. SanTan Spirits are distilled and aged locally in Chandler, Arizona and have earned national recognition and awards. The experience of enjoying SanTan Spirits is fully realized in Spirit House, a tasting room and cocktail lounge opened in 2019. SanTan’s mission is to create uncommon quality for everyday occasions. To learn more, visit www.SanTanBrewing.com.