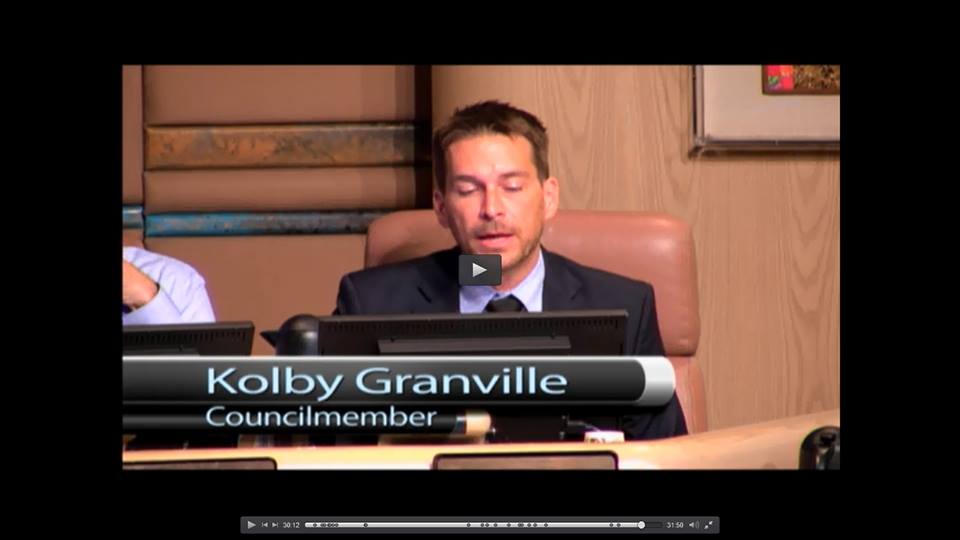 Over Ordinance He Supported.

During the public comment section of the April 21st Tempe City Council meeting, Tempe Officers Association Vice President Rob Ferraro spoke passionately about the disappointment and unhappiness experienced by Tempe’s police officers over recent comments made by City Councilman Kolby Granville. Councilman Granville has a long history of attacking public safety employees. The thing is, it appears this elected representative can dish out criticism – even when it’s unwarranted – but he can’t take being called to accounts for his actions.

Recently, Councilman Granville lobbied for and supported an ordinance to ban sitting on the sidewalks along Mill Avenue downtown. This ban was supported by the businesses along that stretch of Tempe. While that’s certainly fine, Councilman Granville then took such support a step too far – by encouraging citizens to attempt to entrap Tempe police officers. As he put it: “I would like, I would encourage you, I want you to show me evidence to the contrary the way this is applied if it happens. Sit down on a sidewalk and sit down next to someone you think is going to get stopped and see if the police walk past you and talk to the other people instead. If that’s the case we all want to know that and we would want to know it immediately.”

Simply put, encouraging citizens to break the law in an attempt to provoke a confrontation with police is irresponsible. The fact that a member of the City Council would do such a thing – especially to entrap and embarrass our police officers – defies all common sense.

The truly sad part of all this is the lengths Granville went to in an attempt to silence the police. Prior to the Council meeting, he was seen outside City Hall pleading with City Manager Andrew Ching and New Police Chief Sylvia Moir to stop Ferraro from presenting on the record. Fortunately, the City Manager and the Police Chief refused to restrict the First Amendment rights of a police officer.

Over the years, Councilman Granville has used his Council seat as a soapbox time and again. His unending stream of social media “selfies” and self-serving posts talk incessantly about his favorite subject – himself. Meanwhile, he has isolated himself on Council and away from the very city employees he claims to want to help achieve success.

Ferraro is the current Vice President and the President-elect of the Tempe Officers Association. He represents nearly 350 law enforcement professionals. Ferraro told Granville that “words matter” and went on to say, “Amid all of the national controversies involving police and community relations, your rhetoric does nothing to encourage positive outcomes. You effectively urging people to ‘entrap’ our officers is counterproductive and irresponsible.”

Ferraro was exactly right – and within his rights to make such comments, despite Granville’s attempt to silence him. Afterward, Granville gave a standard career politician apology. Then he lectured Officer Ferraro about the virtue of criticizing in private and praising in public.

Councilman, perhaps you should heed your own advice. Or grow a thicker skin.