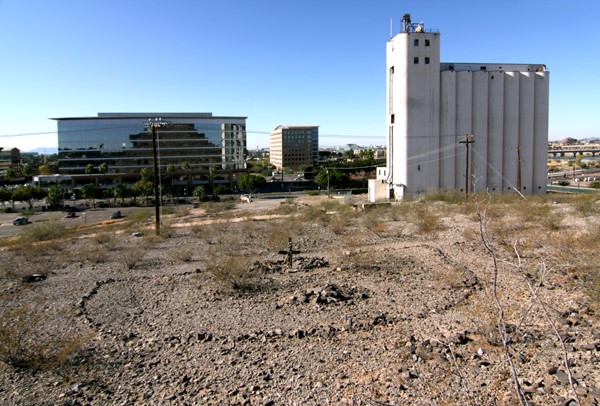 This is a most improbable column. How else would you describe a 500 word essay on a subject for which you know virtually nothing ─ except what the eye can see?

But introducing such a vague topic may be just the thing when help is most needed ─ more information from readers.

I don’t know how many times I climbed Tempe’s most visible landmark before I caught a glimpse of them.

Low on the west side of the Butte just above the dirt trail that leads to the challenging asphalt incline are a pair of puzzling memorials generally overlooked by the hundreds of people who pass nearby every day.

One is very recent. The other has been standing for as long as I can remember.

The shrines ringed by two arcs of carefully placed stones lie on a gently sloping area strewn with small rocks and a few hardy creosote bushes.

A prominent feature is a well-weathered wooden cross absent of any inscriptions. Nearly two dozen disparate artifacts hang from and surround the marker.

The symbolism of the mementos is known only to those who placed them. They include a disparate inventory ─ a ball point pen, variety of beads, rubber bracelet with the words “Finding cures, saving children.”

There’s a clothes pin, a key, some pennies, a variety of plastic items including a cockroach, spider, a miniature Christmas wreath and several flowers.

An old whiskey bottle lies nearby. A couple of pine cones are scattered about. And an artistically braided rope hangs from an arm of the cross.

The assemblage of keepsakes also includes a paint chip containing many layers of colors from the “A” high atop the Butte.

What does it all mean? The fact that the shrine is well maintained indicates it is still regularly visited by caretakers. To learn the story of the Mystery Cross, we just need to find out who they are. Can you help?

Just a few feet above the cross is a more recent, smaller shrine. Its story is easier to understand.

In the center of a small circle of stones is a rock engraved with the following:

“Guardian of the Butte”

Well known in Tempe, Dillon was a long-time activist / writer whose ties to the community dated back to the early 1960s.

When the Butte itself and its view corridors were endangered by proposed development in the late 1990’s, Dillon successfully led a group of citizens determined to protect Tempe’s most significant physical landmark.

Powerful local outrage and protest forced city leaders to agree to an ordinance limiting development to a line below 1080 foot elevation. About the height of the mill’s silos.

One shrine explained. The other?  Still a mystery.