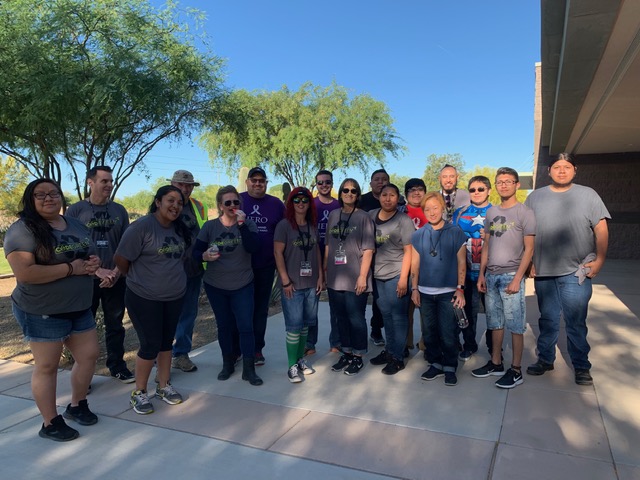 (MARICOPA, Ariz. – May 1, 2019) – For the seventh year in a row, Harrah’s Ak-Chin Casino employees participated in a local CodeGreen Adopt-A-Highway Cleanup event, which took place on Saturday, April 27.

This CodeGreen event is one of the many ways Harrah’s Ak-Chin Casino and its employees give back to the community during its CodeGreen Challenge month, an initiative established by Caesars Entertainment in 2008. CodeGreen is an organization-wide strategy to drive environmental awareness and engagement, as well as performance across the business.

In addition to the Adopt-A-Highway event, Harrah’s Ak-Chin Casino has recently participate in Earth Hour, held both a plastic bag and clothing drive, hosted a paper shredding event and celebrated Earth Day at the casino.

Celebrating 25 years in Maricopa, Arizona, Harrah’s Ak-Chin Casino is Arizona’s first and only tribal casino to have an international management partner. Harrah’s Ak-Chin is the only casino in Arizona that allows guests, through its Total Rewards program, to unlock benefits and other prizes that can be used worldwide at the entire Caesars’ family of casinos.

Harrah’s Ak-Chin also boasts the only Bingo hall in the Caesars organization, continuing the proud heritage of William F. Harrah, who opened his first Bingo hall in Reno in 1937.

Harrah’s Ak-Chin has been named a Most Admired Company by Arizona Business Magazine and Best Companies AZ, and Phoenix Business Journal has named the property one of the “Best Places to Work in the Valley” four consecutive years. Harrah’s Ak-Chin was also awarded a Volunteer Service Award from the Arizona Governor’s Commission on Service and Volunteerism.