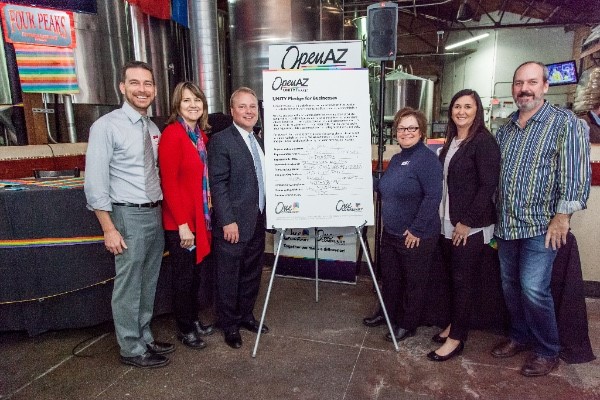 Tempe-based brewery Four Peaks Brewing Co. signed the UNITY Pledge in support of fully inclusive non-discrimination policies in the workplace, housing, and public accommodations for all Arizonans, including individuals who are gay or transgender. The first Arizona brewery to sign the pledge, Four Peaks joins over 2,100 businesses and organizations including My Local News – AZ, GoDaddy, Fry’s Food & Drug Stores, Yelp, Uber, Professional Firefighters of Arizona, PetSmart, and Coca-Cola in supporting a fully inclusive Arizona.

“We are proud to be an Arizona-born company that has welcomed all communities since we first opened our doors. We believe that good beer makes for good company and we look forward to continuing to welcome and support equality for all Arizonans,” said Jim Scussel, co-founder of Four Peaks Brewing Co.

“Four Peaks, like the City of Tempe, understands that if you want to be the best there can be no barriers to attracting top talent. Running a successful business is about serving all people, not just some people.  At their core, non-discrimination policies are rooted in the American values of fairness, equality and opportunity,” said Mark Mitchell, Mayor of Tempe.

While five municipalities have ordinances that ban discrimination, Arizona has no statewide laws that protect gay and transgender individuals from being fired or refused service, housing and public accommodations based on their sexual orientation or gender identity. To promote a fully inclusive Arizona, ONE Community, a member-based coalition of LGBT and allied individuals and businesses, created the UNITY Pledge: a public declaration to support and advance workplace equality and non-discrimination policies in housing and public accommodations for LGBT individuals and their allies in Arizona.

“We are thrilled to welcome our first brewery into our UNITY Pledge family,” said Angela Hughey, President of ONE Community. “Four Peaks Brewing Co. not only makes some of the best beer in the nation, but they are an economic engine and job creator for Tempe and the state of Arizona.  They understand that when we celebrate, respect and protect all who live in our great state, we all succeed,” concluded Hughey.

About Four Peaks Brewing Company:
Four Peaks Brewing Company is a twenty-year-old brewery based in Tempe, AZ. Founded by Jim Scussel, Andy Ingram and Randy Schultz, Four Peaks has helped to define craft beer in the Southwest. Four Peaks’ hometown pride and heritage is at the heart of the brewery, providing high-quality beer, food and service in a welcoming atmosphere.  Four Peaks’ original brewery and pub location is in a building that used to be an old creamery, and a lot of historic details remain within. From the start, Four Peaks has taken pride in their water treatment, which has allowed the brewers to replicate the water profiles found in Munich, London, Edinburgh, Cologne, and Burton, England. Four Peaks has been recognized with 24 combined medals at the Great American Beer Festival and World Beer Cup, and remains committed to innovating exceptional beers meant to be shared. Anchored by its flagship, Kilt Lifter Scottish-style Ale, Four Peaks’ brands are currently available in Arizona, Nevada and New Mexico.

About ONE Community:
ONE Community is a member-based coalition of socially responsible businesses, organizations and individuals who support diversity, inclusion and equality for all Arizonans.  We are committed to reshaping Arizona’s image through educating, empowering and connecting our diverse LGBT and allied communities on the benefits of inclusion and its direct impact on attracting and retaining top talent and businesses—and thereby, ensuring our state’s economic sustainability.