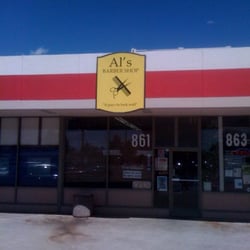 As the owner of Al’s Barber Shop at Grant and First, he has a long history with the local community, considering he’s been cutting hair here for 59 years.

Al first arrived in Tucson in 1959 after leaving Cleveland, Ohio. Although he had ambitions of joining the military, life took him on a different path. He went to barber school and fell in love with the profession that paid the bills and allowed him to meet new people. He’s been cutting hair ever since.

Nearly 30 years ago, he became the owner of a midtown shop. Over the years, it’s safe to say he has trimmed the hair of thousands of residents and visitors in Tucson.

Now, Al has closed up shop much to the dismay of some of his loyal customers who will miss him dearly. Luckily, he isn’t setting down his scissors for good, and instead plans to work at Tommie’s barbershop down the street, just east of Country Club. His plans to slow down, play more golf and enjoy his semi-retirement sound pretty good for Al!