I had the the fortunate opportunity to sit down with Mayor David Smith of Bisbee, Arizona on a beautiful day in late March at High Desert Market.  Mayor Smith is an applicable guy who seems to truly love Bisbee and all of the idiosyncrasies that the city has to offer.  For those that don’t know Bisbee is located approximately 200 miles South of the Phoenix metro valley.  In it’s 1890’s height Bisbee was more populous than San Francisco.

Mining up until the 1980s was the lifeblood of this city. Now with the planned Mar-a-Wallgo resort Bisbee has the opportunity to “be great again”.  In fact Bisbee was named “best historic small town” by USA today readers.

The Naco / Arizona border is only five miles S. of Bisbee and Mayor Smith is enjoying the publicity and potential jobs that the proposed Mar-a-Wallgo Trump resort will bring.

Mr. Mayor why do you believe the proposed Mar-a-Wallgo resort will be a good thing for the City of Bisbee and is it true that the Putin Government has offered to purchase Bisbee?

“We are incredibly excited about this ‘Taj Mahal of the West’ being located on our border,” said Smith. Plans are already in the discussion stage for a satellite office of the Russian Embassy to move into our soon to be acquired Camp Naco, located a block from Walargo. This will provide a multi-national meeting location for the negotiation of an expanded NAFTA agreement to include Russia that we have deemed “RAFTA.”” 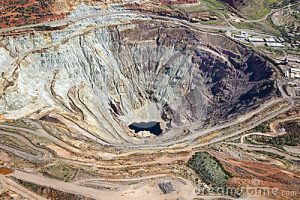 Please tell us if you would about confirmed rumors that feasibility studies are underway to turn Bisbee’s open pit mine into what developers are calling a “lake oasis in the desert.?”
“Frankly, I am slightly unhappy that this future development has been ‘leaked’ prior to the Grand Opening,” Smith grumbled. “The city has been working very hard with the mining company in acquiring this property as a recreation resort. We plan on filling the pit with salt water and introducing three types of endangered shark species. A zip line will then be set-up to run over ‘Lagoon de Bisbee’ from the Queen Mine Tour building’s newly constructed roof platform to the roof of City Hall, located at 118 Arizona St. – a distance of approximately three miles. This exhilarating experience will allow the participant to chum for the sharks (for a slight additional charge) at the beginning of the journey, as well as show agility by avoiding the church steeple toward the end.”

We wanted to bring you more from our interview but it ended abruptly when Trump Mar-a-Wallgo organizers got wind of our interview and directed us to forward all questions to Sean Spicer.