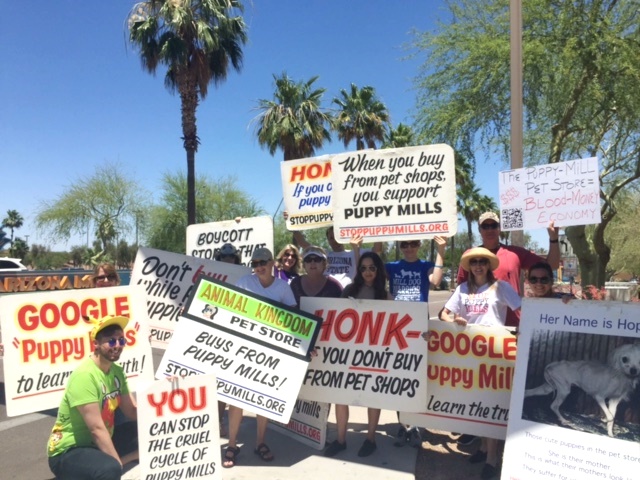 It was during a May 22 puppy mill protest at Arizona Mills Mall in Tempe that a single incident reignited my faith in humanity and moral conscience.

The older model SUV stopped at a red light alongside our protest when the window rolled down and a Hispanic couple and child appeared. The wife reached into her purse and extended two $1 bills. I immediately felt my body warm to such a gesture, and with a smile I simply said, “Bless you, but I can’t take that.” In return I shared information on the Missouri puppy mill, cited by the USDA for animal care violations, which sells and ships puppies to Animal Kingdom, which turns around and sticks them in a mall window front to prey on emotions and lure shoppers into dropping thousands of dollars to buy a puppy rather than adopt a homeless animal.

The human spirit and simple human decency recently took a hit when Gov. Ducey signed SB1248, striking down Phoenix and Tempe commercial pet store bans as part of a broader blueprint of this state government to enact tyrannical rule. But I have a message for the governor, legislators and the special interests that have victimized animals in their power grab: citizens who care about animal welfare aren’t going away. And that includes virtuous families whose votes will ultimately prove more valuable than the heartfelt generosity of $2.