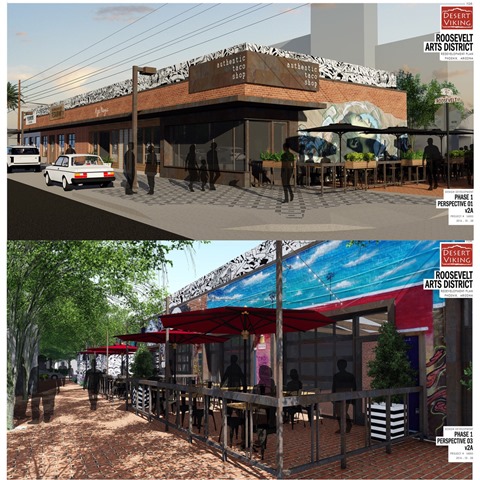 Scheduled to open spring 2017, award-winning Chef and Restaurateur Aaron Chamberlin of St. Francis and Phoenix Public Market Café is bringing a new concept to the area. “I think Desert Viking has great vision and we are thrilled at the opportunity to continue to be a part of downtown Phoenix and the Roosevelt Row District,” says Chamberlin. “We’ve had the Phoenix Public Market Cafe in downtown for three years now, and I’ve lived in and been involved in downtown for the past 10 years. We know what a special project this is and we look forward to continuing to feed the downtown community.”

Roosevelt Row’s very own John Sagasta (Melt, Jobot Coffee & Diner and the former Flowers Craft Beer & Wine) is eager to bring another equally enticing concept to The Blocks of Roosevelt Row during Phase II, scheduled to open fall 2017. With details still in the works, Sagasta, a longtime supporter and contributor to 5th Street’s overall success, remains passionate and committed to being a part of these last two historical blocks.

“While things are changing on 5th Street, its future has never looked brighter. Lawn Gnome is still hosting thoughtful community-driven shows. Lost Leaf just got a facelift and still has the largest craft beer selection in downtown. Buds is the headshop with a heart, and if you know Buds then you know no one has a better headshop game around. Made continues to lead by example selling handmade products and holding on to the last gallery on Roosevelt.

5th Street Tattoo is still keeping everyone inked. Then there’s Melt, the little ice cream shop that could — still there day in and day out, hooking up the masses with one of the best-made locally-owned dairy products this side of Casa Grande. Desert Viking’s vision of 5th Street, though different looking, still promotes ideas of hype, congregation and community involvement. Fifth Street will never look the same, but fortunately many of the same players are still dealt in and can only benefit from future successes of developments to come. I’m confident that Desert Viking’s generous nature and commitment to supporting locally-owned business and events will provide many opportunities for entrepreneurs and creatives alike,” says Sagasta.

AV3 Design Studios, a Phoenix-based architectural and design firm, completed the conceptual master plan and is leading the renovation of the Flowers building as part of Phase I. Taking the lead in the architectural design and construction for Phase II is Form Third – a locally-owned and operated design-build company located in the heart of Roosevelt Row.

“We are honored to be selected as the Phase II design-builder for this unique downtown project,” says Shawn Goetzinger, partner at Form Third Design-Build. “Being a part of Phoenix’s downtown is important to our team. Our plan is to work side-by-side as a partner in the entire process to not only meet the design and building goals, but the overarching goal of maintaining the integrity of the downtown area.”

“Our company was built on the philosophy of developing the ‘third’ space – that space between work and home. To have a project like this that creates that in our own neighborhood is so important to us,” says Robert Des Rosiers, partner at Form Third Design-Build.

“We are excited about the tenants and architects we have on-board, and continue to look for other local restaurants, retail owners and artists to balance out the project and enhance the vision,” says Kreipke.

The Blocks of Roosevelt Row is located at 5th Street and Roosevelt in the heart of the Roosevelt Row Arts District. http://www.theblocksroosevelt.com

About Desert Viking: Founded in 1997 by Niels Kreipke, Desert Viking Development is a leading real estate development firm based in Arizona and recognized for their investment in the restoration of historic properties, adaptive reuse projects and ground up construction developments. As a company, Desert Viking has acquired and/or rehabilitated over 20 National Register Historic properties and completed numerous mixed-use projects throughout the Phoenix metro area. Their portfolio includes the recently completed Crown on 7th Street, The Womack, more than a half dozen buildings in Historic Downtown Chandler, as well as the Lamar, Guiding Star and Historic Gold Spot Marketing Center located within Phoenix’s Roosevelt District. With a vast array of experience in all facets of real estate including commercial, retail and residential properties, Desert Viking has become an industry leader in the Phoenix real estate market.