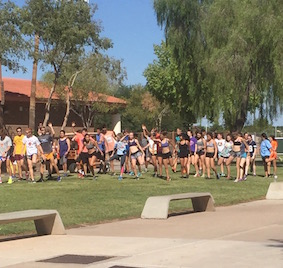 If you’re looking to play a sport and not go broke, you might try try cross country running.

“The players pay a sports fee, then the school provides them with uniforms,” said coach Ari Rodriguez.

Besides buying some pricey shoes, the runners don’t need to purchase anything else.

“For cross-country, it’s a pretty cheap sport,” said Rodriguez. “But shoes are expensive. We ask them to buy ideally four pairs a year, and they can range from $100 to $150.”

The runners need specific types of running shoes, so shoes must be purchased from specific stores, rather than the average sporting goods store.

The team will also do various fundraising activities throughout the year, such as the upcoming Hot Chocolate Run in Scottsdale on Sunday, December 4, 2016. In exchange for bringing in volunteers, they will donate $10 per volunteer to our Corona Cross Country Boosters.

“We do a team-building fundraiser at the end of the year,” Rodriguez said. “It’s the Hot Chocolate Run, we volunteer for that.”

The team has also done other fundraisers in the past, such as selling coupon cards and back massages. All the money raised goes into a cross-country fund.

“We pull out of it for uniforms or anything the team might need,” Rodriguez said.

The money from the fund will go toward things such as race entry fees and the yearly team t-shirt.

The team usually has money left over at the end of the season.

“We try to be pretty smart about how we spend our money,” said Rodriguez. “I think that we’re pretty lucky, because cross-country is a pretty cheap sport.”