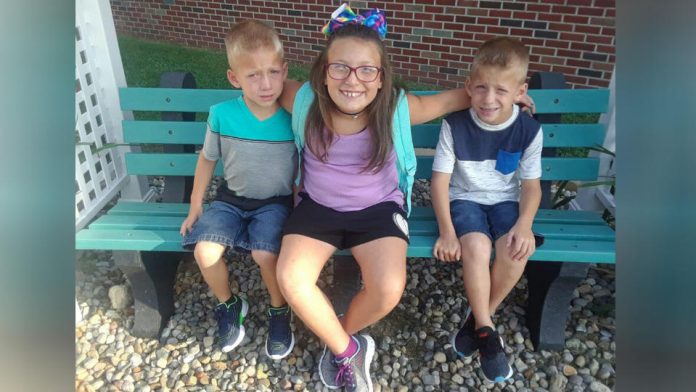 What should have been a safe and routine morning walk to the school bus turned deadly on Tuesday in rural Indiana.

Tragedy unfolded near Rochester around 7 a.m. as three siblings were struck and killed by a pickup truck as they crossed the road to board their school bus.

According to Indiana State Police, the victims in the Tippecanoe Valley School Corporation school bus stop crash have been identified as 9-year-old Alivia Stahl, 9, and her 6-year-old brothers Xzavier and Mason Ingle.

“They were struck by southbound 2017 Toyota Tacoma driven by a 24-year-old female,” Indiana State Police Sgt. Tony Slocum told reporters at the scene as seen in a video obtained and published by the South Bend Tribune.

“The investigation has shown that a school bus was traveling northbound and stopped, put its stop-arm up and had all the emergency lighting that is on the bus activated. The children then started to cross into the roadway and they were struck by the southbound vehicle,” Slocum said in regards to the tragic deaths of these three students of Mentone Elementary School.

A fourth child, unrelated to the others, was also hit and rushed to a Fort Wayne hospital via medical helicopter. 11-year-old Maverik Lowe remains in critical condition with multiple broken bones and other injuries.

No children were aboard the bus at the time of the crash, but there were other kids at the bus stop who saw the horrific scene unfold. “It’s a very delicate situation. Just a very, very sad situation,” Slocum told reporters. “There are young children who might have witnessed a very catastrophic event. It’s a very hard scene. I haven’t seen troopers cry in a long time. The father had to come out and identify his children, it was excruciating.”

A GoFundMe page was established by family friends to help the Ingles during this devastating time. The campaign had nearly surpassed its $100,000 goal within one day, with many donors sharing their condolences and making a difference.

“Our school corporation has suffered a tragedy this morning. We have learned of three student fatalities and one student seriously injured and airlifted to a Fort Wayne hospital as they were hit by a vehicle while boarding their bus,” the statement said. “We have deployed all school counselors to meet the emotional needs of our staff, students and parents. We are awaiting to learn more confirmed details but wish to ask the community to come together to pray for the families, our students and our staff.”

The driver was identified as Rochester resident and 24-year-old woman Alyssa Shepherd. On Tuesday afternoon, she was arrested at her workplace when officers served her with a Fulton Superior Court arrest warrant, according to a press release from Indiana State Police. She’s currently facing three felony charges for reckless homicide and a misdemeanor count for passing a school bus with the stop arm extended, causing injury. She was held in the Fulton County Jail on a $15,000 bond.