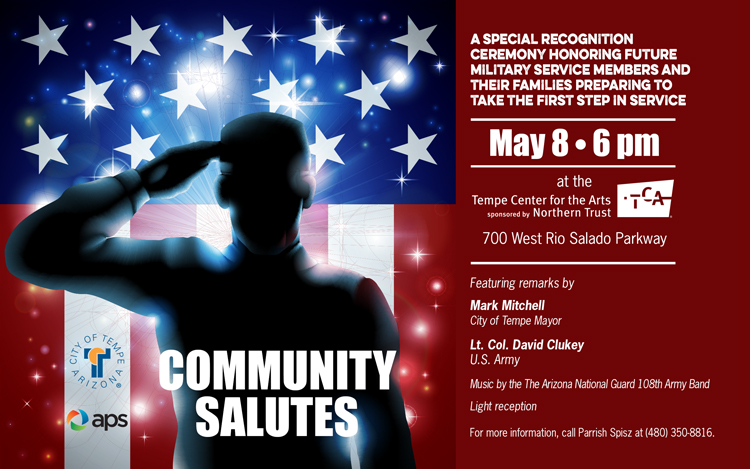 The community is invited to a sendoff salute to 56 Tempeans on Monday, May 8 at 6 p.m. at the Tempe Center for the Arts, 700 W. Rio Salado Parkway. Tempe Community Salutes will recognize these recruits before they join the ranks of the Air Force, Army, Coast Guard, Marine Corps and Navy, and the Arizona Army National Guard. It is the third year for this program in Tempe.

The recruits will take the stage to be greeted by Mayor Mark Mitchell and Lt. Col. David Clukey, U.S. Army, Phoenix Recruiting Battalion Commander, formerly with Special Forces Command. They will also receive the good wishes of family and friends.

Each recruit will receive a challenge coin – a small medallion bearing the insignias of the U.S. military branches with the message, “The First to Say Thank You.” Additionally, graduating Tempe high school seniors will be draped with special neck stoles – ones imprinted with their chosen military branch, which they also can wear to their high school graduation ceremonies. Melchizadek Dickson of McClintock High School is one of the students who will be wearing an Army neck stole.

“We’re honored to recognize our young community members and their families for their commitment to national service,” Army veteran and Tempe Vice Mayor Robin Arredondo-Savage said.

Sponsors of this event include: APS, Navy Federal Credit Union, The Opus Group, Gorman & Co and the Association of the US Army.