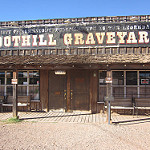 Long-time residents of Cochise County know well how the town of Tombstone draws major tourism with the Gunfight at the OK Corral serving as the top claim to fame.  Most natives can also identify Tombstone as the location that kicked off civil development in Cochise County when the mining camp came to be in October 1877.  In fact, when Cochise County separated from Pima County in 1881 and asserted itself, it was Tombstone that served as the county seat.  Bisbee formed afterwards, as a smaller mining camp.

Books and other publications abound concerning the origins and lore of the Wild West, Tombstone, and this vicinity in general.  One book particularly has provided the most enjoyable read and informative tour back in time: Tombstone’s Yesterday (True Chronicles of Early Arizona) written by Lorenzo D. Walters, published by Acme Printing Company in 1928.  This book combined with research aided by other scholarly / literary / historical societies, and my personal visits to historical landmark, leads to the 2nd Cochise Sunny Day Out series.  Destination: Tombstone’s Boot Hill.

To visit the cemetery naturally means you will stop in the town of Tombstone, and it will be evident that there is much more to explore than just the old graveyard, however Boot Hill deserves its own article.  Looking deeper into the souls laid to rest there (whether literally or symbolically), can stretch a three-minute walk through into a long pondering of bygone times where political correctness was inconceivable fluff, where our modern medicine and technology smelt akin to witchcraft.  Some of the characters here lived some vibrant adventures, and the events culminating in their posthumous representations make some grand legends.

Concerning the location and state of Boot Hill Cemetery, Mr. Lorenzo D. Walters testifies to the following: “From the latter part of 1877 until about 1887 there were probably more real gun-men in Cochise County, Arizona, and its adjoining counties, than were ever gathered together in any one locality or territory of that size in the United States either before or since …. With the birth of Tombstone Mining Camp in October, 1887, there appeared from all parts of the United States, a conglomeration of men, good, bad and indifferent, with a predominance of the bad and indifferent.”  (11)  “Tombstone’s Boot Hill holds the remains of scores of notorious outlaws who flourished in those days, their last resting places marked only by mounds of stones, erected above them at the time of their burial for the purpose of preventing coyotes and other wild animals from a precipitating a premature resurrection …. In later days there were two new cemetaries established, and many bodies were transferred to these …. Old Boot Hill is located on a long ridge to the northward of t own, and is fast becoming a dumping ground for city refuse.”  (19)

Some epitaphs reassure us that not everyone met a violent end. 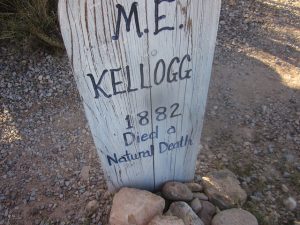 Some epitaphs remind us that life is full of struggles, and some will fight the same soul-wearying battles of depression, 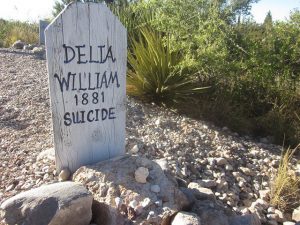 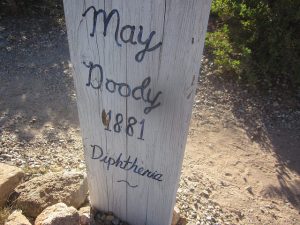 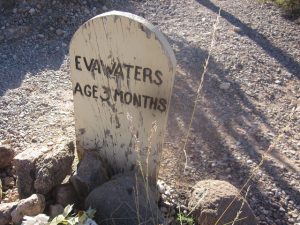 Some epitaphs represent cultural exchanges from the other side of the world. 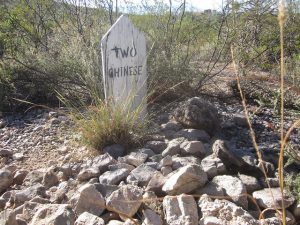 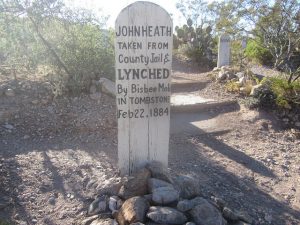 recount just how vastly different society functioned at that time. 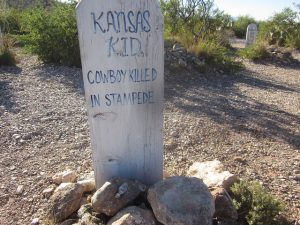 Admission to Boot Hill is free, but I’m sure the attached store will appreciate any purchase, and it’s a nice way to thank them for maintaining public bathrooms for their visitors.  Should anyone require a spot to sit and rest, there is a shaded picnic table area.  During the warm weather, snakes like to sun themselves, but the general traffic encourages them to find more secluded spots away from the traffic; if you encounter that one who wants to be in the mix with the rest of the action, backing away quietly and slowly is your best course of action. 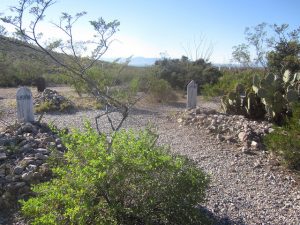 Pathways provide enough room to maneuver wheelchairs – they are gravelly, however. 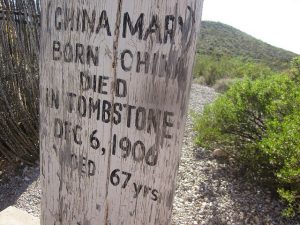 and should be a “Must-See” for those researching their own heritage and/or history of Chinese who came to the American West during the mining and railroad developments.

Sunny Days Out adventurers from nearby Mexico, it goes without saying that the area holds great significance also to Mexican settlers who mined, worked the railroads, ranched and farmed, and those who indulged along with their American and Chinese (etc) counterparts in some good ol’ fashioned (literally) gambling, 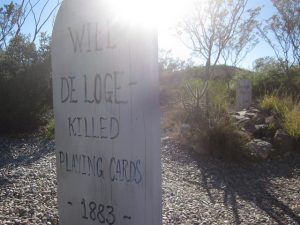 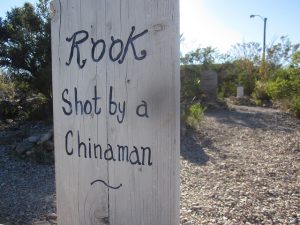 – shocking now to some, fascinating to others, amusing to a few – it was all part of the Wild West life back then.

Boot Hill and the town of Tombstone demonstrate that times change and societal norms evolve and devolve, but people don’t, and we all eventually come to The End.

Many Happy Sunny Days Out!