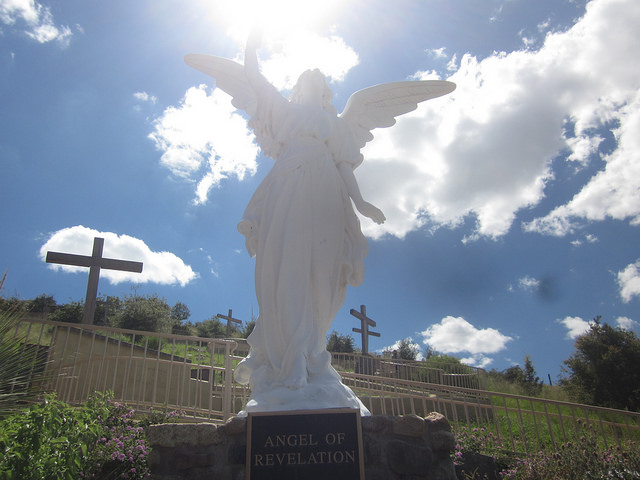 It’s no secret that the local population of Southeastern Arizona and surrounding rest of the state, New Mexico, and Mexico lean heavily towards forms of Catholicism, 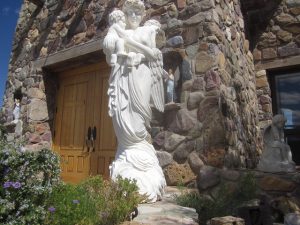 and the religion has inspired some beautiful, very striking works of Art, Music, and Literature throughout this region.  Cochise County houses a number of these creations, notably among them, the 3rd feature in the series of Cochise County Sunny Day Out: Our Lady of the Sierras shrine in Hereford, Arizona.

Our Lady of the Sierras is a Marian shrine situated to the West off Highway 90 between Sierra Vista and Bisbee. 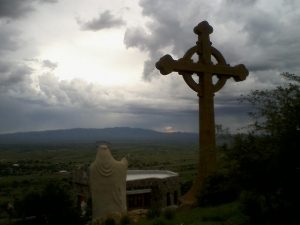 The towering cross, the Virgin Mary, and the three white marble Angels of Revelation, Consolation, and the Guardian of Children contrast with the ragged, jagged mountain ranges surrounding the San Pedro Valley’s populace.  Built into the mountain side, the relics appear to watch over Life below.

Some insight into the history of Catholic shrines, and Marian shrines, may help clarify the significance of this notable display of devotion embedded into the topography of humble Hereford, Arizona.

Until 1983, shrines were not addressed, encouraged, nor protected by formal recognition or law from the Catholic Church.  This changed with legislation enacted through the 1983 Code of Canon Law sponsored by Pope John Paul II.  A Marian shrine symbolizes devotion to the Virgin Mary. 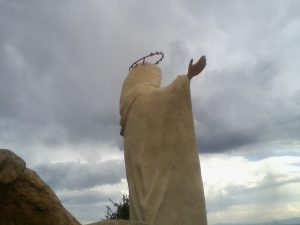 It is intended to accomplish at least the following:  1. To cultivate the via pulchritudinis, or a sense of God’s beauty revealed in Mary – 2. To provide an atmosphere for discerning and responding to vocation as a gift of God – 3. To be associated with or to sponsor a work of charity – and 4. To foster an ecumenical prayer, encounters, dialogues.  (CatholicCulture.org)

Catholics do not stop in Hereford to casually lay indifferent eyes on some statues congregated in the middle of the Sonoran dessert. 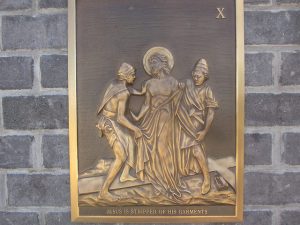 Stopping at shrines constitutes a pilgrimage, and the Church interprets this as an effort of sacrifice and reverence to draw closer to God.  To a Catholic pilgrim, making a trip to Our Lady of the Sierras signifies an act of spiritual renewal.  With this being understood, for the non-Catholic and local adventurer such as myself, a shrine open to the general public conveys an invitation to visit, learn, photograph, write, venerate, and share. 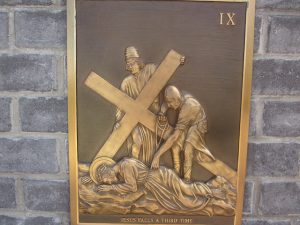 and built their retirement home in 1991.  They developed an ambition to erect a sizeable cross on their property, and the wife decided a statue of the Virgin Mary was a necessary addition.  They discovered that to obtain permission to proceed from the county, their giant cross and statue would have to officially constitute a monument, and it would be essential to include a chapel.

Construction did not happen in earnest until 1997 and was completed in 1998.  The Catholic Church regards the completed project as a shrine, 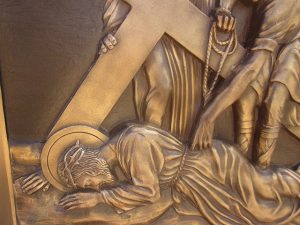 but as far as Cochise County is concerned, it’s a monument.  The 14 Stations of the Cross were unveiled in 2002, and they feature bronze plaques along the trail ascending the mountain.  In 2004, the Angels joined the stations, and the Guardian of Children found its place in 2005.  Then 6 years later, a fire originating in Mexico swept towards the valley, effecting much destruction and loss of property in its path.  The shrine did not escape unscathed, and the chapel’s interior suffered notable damage.

What you can anticipate today is railed paving which leads you along a bronze depiction of the Via Dolorosa. 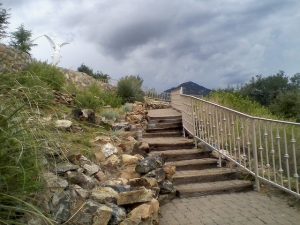 You can also expect the incline to take your breath if you zip along faster than your fitness level.  I strongly caution those with respiratory and heart challenges to enjoy a more leisurely pace, particularly during the high Summer temperatures.  There are public bathroom facilities, and the essential water fountain is located by the West chapel entrance.

Not to disregard the religious magnitude of this site, but for those who appreciate the Arts, the 14 Stations of the Cross   convey such fine details in the sculpting of clothes and facial expressions seen from various angles, 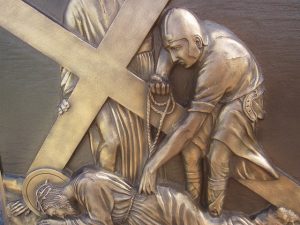 that it’s challenging indeed to view the work and not express admiration for the skill and craftsmanship.  I won’t fabricate any spiritual epiphanies, but each visit has brought serenity, relaxation, and a deep pondering of the work and talent showcased in the design, construction, and landscaping of Our Lady of the Sierras.

Fellow Sunny Day Out adventurers from nearby Mexico, the shrine ties into the leading religion of Mexico and is considered a significant place of cultural interest.

This is a stop worthwhile for those interested in exploring different places of worship in Arizona, work by local Arizona artists, or places of general historic/cultural significance in Cochise County and Arizona.  You can view an album which shows each of the 14 crosses and additional photos at this link.

Many Happy Sunny Days Out!

Note to Readers:  I am selecting locations and activities which are free or cost minimal for families and individuals who like to explore but have strained finances.  In no way do I endorse any particular religion, as I do not follow any.  Any religious sites recommended in this series are included for their historic, cultural, and/or artistic value.  Links provided to religious websites serve to provide source information for locations, operating times, and other details relevant to planning an excursion.

Other articles in this series: