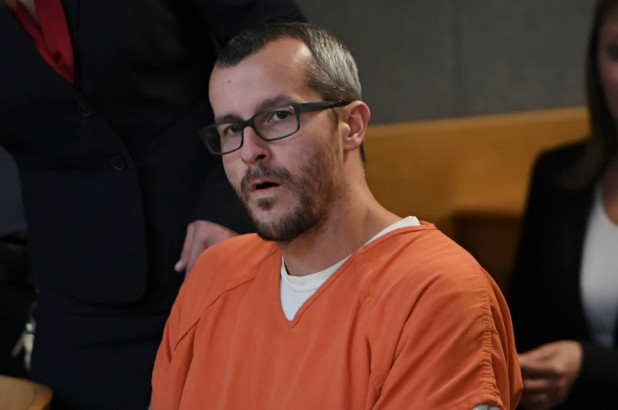 In recently released video footage, a calm and collected Chris Watts can be seen inside a police interrogation room, telling his father that he murdered his pregnant wife Shanann in  a rage.

The startling video was obtained by The Denver Post and was taken on Aug. 15 — the day the 33-year-old Watts was taken into custody and charged with murdering his 34-year-old wife and their daughters, 4-year-old Bella and 3-year-old Celeste.

“I freaked out, you understand me,” Watts says, after telling his father, Ronnie, a story that investigators have discovered is a complete fabrication: that he flew into a rage and choked Shanann after finding her strangling the girls in the early morning hours of Aug. 13.

“She hurt them,” Watts says. “And then I freaked out and hurt her.”

According to an affidavit from his August arrest, Chris told police that he killed Shanann only after he saw her on a baby monitor strangling one of their girls following his announcement that he wanted a separation.

Chris plead guilty to the crimes last week, essentially admitting that his explanation was a lie in order to protect himself. This confession happened soon after Watts failed a polygraph test and investigators encouraged him to tell the truth. Detectives revealed they knew of his affair with a co-worker, and Watts asked to speak to his father. After telling his dad about his crimes, he repeated his confession to officials on the investigation.

Prior to his arrest, Watts pleaded for the safe return of his wife and daughters, appearing in local media interviews. Just over three months later, on Nov. 19, he was sentenced to life in prison without the possibility of parole after pleading guilty to the three slayings.

Shanann’s grieving parents, Frank and Sandra Rzucek, have filed a wrongful death lawsuit against Chris following the loss of their daughter, granddaughters and unborn grandson, who was to be named Nico. Shanann was 15 weeks pregnant when she died.

The suit alleges Watts purposefully misled investigators in the days following the murders, making false claims to the media and the detectives. At the time of the slayings, Watts was having an affair with a woman he met through work named Nichol Kessinger. Prior to his sentencing, prosecutors referenced Watts’ desire for a “fresh start” with Kessinger as his motive behind strangling Shanann and smothering their innocent daughters.

Hours of interrogation footage has also been made public, with earlier videos showing Watts completely and consistently denying any knowledge about his family’s whereabouts or how their bodies ended up at a remote oil work site.