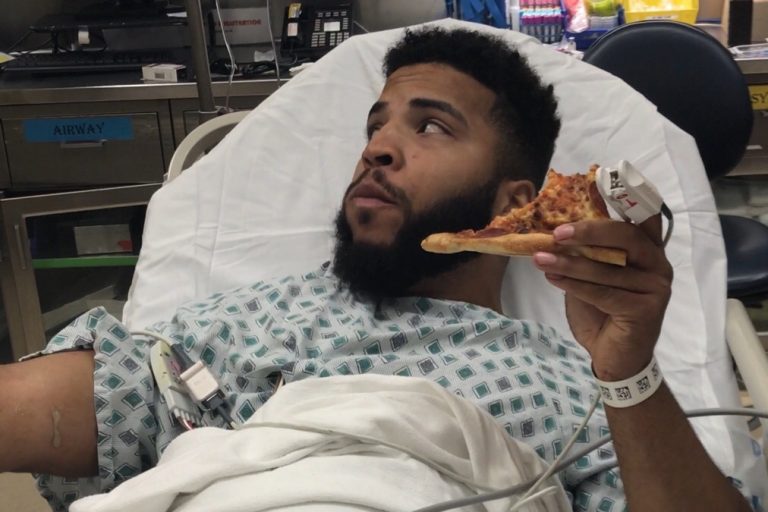 A man is being hailed a hero after intervening in a horrifying attack in a local coffee shop.

Friends and family of Blaine Hodge are spreading the word about his brave actions that saved the life of a woman in immediate danger. On a beautiful Sunday in Bakersfield, California, a Starbucks café turned into a crime scene when 31-year-old Robert Daniel Rivas entered the Stockdale Highway location and attacked an innocent woman with a machete. Police say the Rivas and the woman previously dated.

Hodge, just a bystander, immediately jumped in to help, suffering several stab wounds in the process. He saved the woman and has since been recognized for his heroic actions. Hodge responded to the overwhelming attention by posting on social media.

“There was a person in danger, and I could not just let her die,” Hodge said in an Instagram video.

The woman remains in critical condition. Her grateful brother visited Hodge in the hospital to personally thank him for his lifesaving actions.

Although Hodge faces a long recovery, he has the support of his family and friends, who have been promoting a GoFundMe page in honor of him. So far the campaign has raised more than $16,225, far surpassing the original goal of $9000.

Here’s what his friends had to say on the fundraising page:

“Blaine Hodge is a hero. While at Starbucks for a business meeting on 9/9/2018, he witnessed what was to be a gruesome murder and threw himself between a woman and her machete-wielding attacker.  In doing so, he saved her life and suffered numerous wounds in the process, possibly losing use of his right hand.  He has a long road of recovery ahead of him, 6+ weeks, and now needs his own hero: you. Please donate if you can, or share to raise awareness of this model man who ran towards the danger, risking it all to save a life.”

Blaine coincidentally has an album titled ‘Mind of a Hero’ coming out at the end of the month. Known to his fans as Static, Blaine is scheduled to host a release show on 9/29 Sandrinis Public House in Bakersfield, California. Check out his music online here:
https://soundcloud.com/staticssound/flaws-prod-by-inflicta