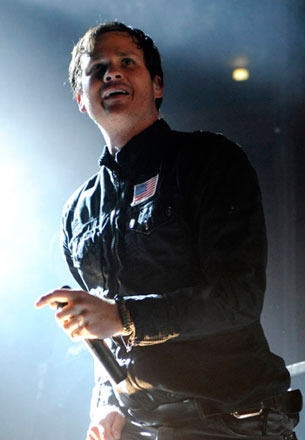 Phoenix fans not singing “I Miss You” for DeLonge

If the Blink-182 fans that packed the Ak-Chin Pavillion, in Phoenix, were worried about seeing the band preform without former frontman and founding member Tom DeLonge, they were not worrying for very long, once the band took the stage with the Alkaline Trio’s Matt Skiba filling in as Mark Hoppus’ co-lead singer.

The sold-out performance was in support of the bands new chart-topping album “California” – which was also recorded with Skiba’s vocals.

While DeLonge leaving the band threatened to turn Blink-182 into a Journey-like band, cashing in on pure nostalgia without the frontman that skyrocketed them to the height of their popularity. However, after the outstanding performance in Phoenix, it is becoming more, and more clear that Blink-182 are handling the DeLonge-departure more like Van Halen after Hagar took over for David Lee Roth, as they are touring a new album (and it is a hit), and already have a single, “Bored to Death,” on the Billboard Alternative Songs chart.

While the band opened the show with DeLonge-era favorites like “What’s My Age Again,” they did play a good chunk of their newer stuff, and the crowd loved every second of it.

The novelty of a now aged-44 Hoppus singing about being to old to do the things he does at the age of 23 was not lost on the band, or the crowd. In fact, Hoppus and the rest of the band remain fully embracing their more childish side, as the show opened with the F-word lighting up in flames behind the band, right before they broke into the 17-years-old “What’s My Age Again.”

The fans in Phoenix gave Blink-182 a warm welcome, but when it comes to DeLonge’s replacement, he was also received surprisingly well, too.