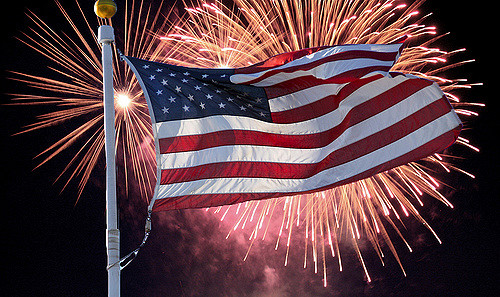 With the recent events of minors being relocated from their families, young adults within the Latinx community have expressed unease during the Fourth of July holiday.

“It’s bittersweet,” Jesus Arredondo said about the Fourth of July. “I love this country and wish only to help it, but I can’t stop but feel that I am not wanted here.”

Arredondo, 20, has been living in North Phoenix since he was two years old and despite living in Arizona for most of his life, he is paying full, out-of-state tuition for a community college due to being born outside of the country.

“I hope America will come to its senses and realize immigrants are not the bad guys,” said Arredondo. “We’re not rapists, drug dealers or cartel members. We’re human beings wanting a better future for our kids and grandkids.”

Like Arredondo, 23-year-old Lus Rodriguez has mixed feelings about the Fourth of July.

“Every 4th of July I think I find it is ironic that people celebrate the holiday because of how I have seen the country be run and the injustice in many cases with all minority groups,” Rodriguez said. While Rodriguez feels the United States has more rights than any other country, she also feels that the rights are being “misused.”

“Yes, I am blessed to have a home but I think our home could be much better, improving from mistakes made in our country’s past,” Rodriguez said. “I would love to see all these children reunited with their families. I don’t think locking up children should ever be considered.” Rodriguez also feels that an “immigration reform with a focus on keeping families together” is the next step for Congress.

Hadaliz Jurado, 19, agrees that an immigration reform “that doesn’t put a bandage on a complex issue” should be created in the priority of reuniting families.

“[Immigrants’] cases should be heard by judges because a lot of the countries they’re fleeing from are inundated with cartels and gangs,” Jurado said.

Jurado remembers when she was a child and had identity problems because of her race. She “rejected” her Mexican heritage and wished for “blue eyes and blonde hair.”

In 2008, Jurado’s father was deported, instilling fear into her as a young child.

“While other kids didn’t care about politics or seeing sheriffs around the neighborhood I became really anxious and was always aware of what was going on around me. I began to feel attacked for being Hispanic,” said Jurado.

“After my dad’s deportation I would walk home as would some other Mexican kids. We would get called [racial slurs] by some elderly white men when they got the chance.”

Jurado’s experiences with adversity have shifted her current views, specifically how she feels about being American now.

“Fourth of July does not feel like my holiday. I feel excluded because all of my life I’ve heard remarks of ‘get out of my country’ from people who proudly wear red, white, and blue. This is my country just as much as theirs but I’ve been made feel the exact opposite.” Jurado said. She believes that the Fourth of July is an all-inclusive holiday, although “the rest of the year being American seems to be exclusive to Caucasians and right-wing politicians.”

Ana Esparza, 20, said that the Fourth of July means nothing to her.

“Maybe once every race can feel the same freedom and independence as white people do in this country, maybe then it’ll mean something to me.” said Esparza. “The next step would be ending all family separation and changing our immigration laws so

that people seeking for a better life can have an easier process of coming to the States legally.”

Esparza had to pay thousands of dollars and wait up to six years before she became a citizen.

“I believe that many people do it illegally because they don’t know any other way and because it is extremely expensive to do it the legal way… if the process can be easier done legally, then more people are going to do it legally.” Esparza said.

Her favorite part of her culture is “how full of life it is as well as the love and unity we have for each other.”