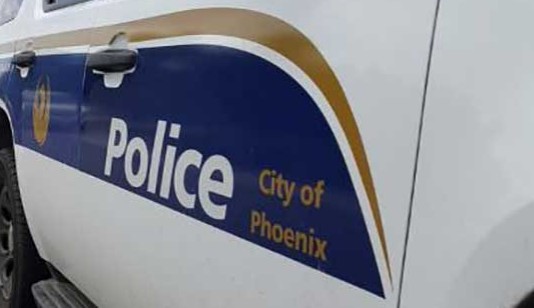 A woman has been taken into custody after allegedly driving her vehicle into a group of three police officers outside a Phoenix gas station.

56-year-old Lori Relf has been charged with aggravated assault with a deadly weapon, aggravated assault against an officer and criminal damage. The incident was captured on surveillance video on the evening of June 4, in the parking lot of a QT gas station in the area of 16th Street and Baseline Road.

Two officers were sitting in a patrol car, while a third officer was standing between the two squad vehicles when Relf rammed into the group with her 2011 red Kia Soul.

According to the official police report, Relf’s “vehicle accelerated toward the officers and collided with the patrol vehicles.”

One officer was left with a possible broken nose and another office had a cut on his head. According to police, Relf admitted to smoking crack just two hours before the incident. The police report also says that Relf told officers she “purposely drove her car into the officers to gain their attention because she was being held against her will by the two male passengers.”

However, surveillance video from the gas station shows that Relf “had plenty of time alone, inside the store, to exit the store and notify the police officers who were in the parking lot the entire time,” the police report states. The video shows one of the men buying Relf a drink.

Both of the men denied holding Relf against her will, but one admitted they had been “smoking crack cocaine for approximately two days and immediately before the collision,” according to the police report.