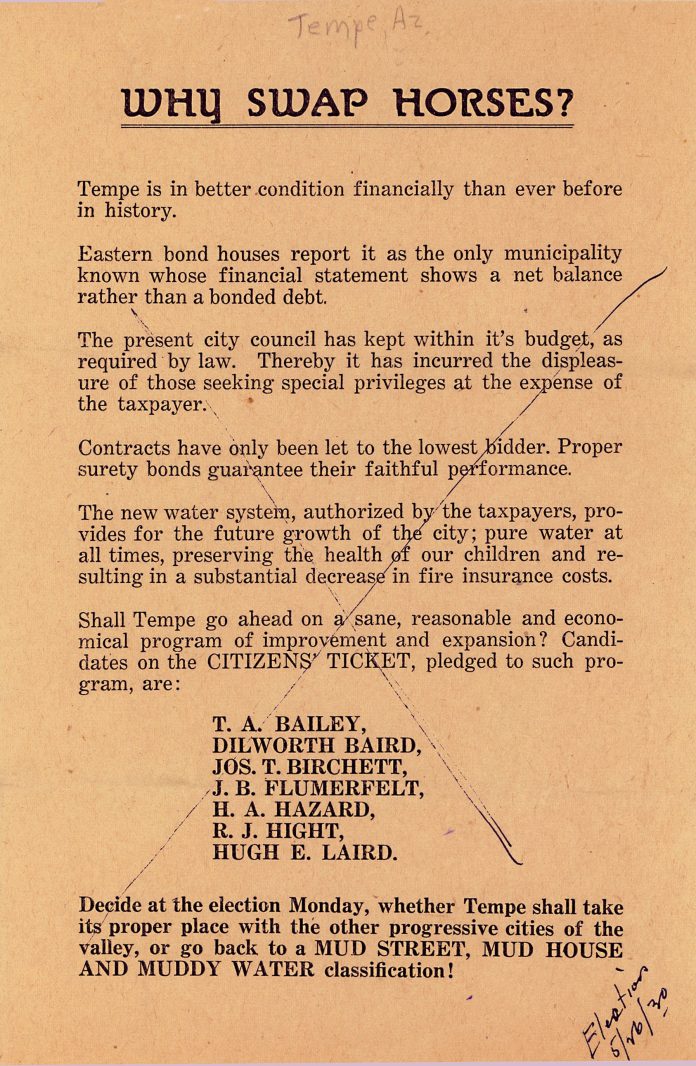 Originally published in February 17, 2012 – Unless you have been vacationing in Antarctica or somewhere else remote, you know that we are in the midst of an electric election year. Next Wednesday, the Mesa Arts Center will be hosting CNN and its entourage for another in an endless season of Presidential candidate forums for those hopefuls still left standing.

Amidst all the hoopla of Congressional and Legislative redistricting. Presidential campaigning and its accompanying media circus, is an election that arguably most directly affects Tempe residents. In fact today we are waking up to the results of yesterday’s mayor and council primary. And gearing up for a General Election round of campaigning by the survivors.

By most standards our local elections are generally rather tame. That got me thinking about elections past – particularly what’s behind an intriguing 1930 broadside asking “Why Swap Horses?”

Scanning the content we realize, when it comes to campaign issues, it’s interesting how little changes over time, like budgets.

82 years ago a 7-member coalition calling themselves the “Citizens’ Ticket,” was boasting that “Eastern bond houses” were reporting Tempe was “…the only municipality known whose financial statement shows a net balance rather than a bonded debt.”

“The present day council has kept within its budget, as required by law,” they declared. “Thereby it has incurred the displeasure of those seeking special privileges at the expense of the taxpayer.”

In 1930, water was as important an issue as it is today, prompting the candidates to claim that “Tempe’s new water system, authorized by the taxpayers, provides for the future growth of the city; pure water at all times, preserving the health of our children and resulting in a substantial decrease in insurance costs.”

Finally, the Citizens’ Ticket candidates ask: “Should Tempe go ahead on a sane, reasonable and economical program of improvement and expansion?”

So who were these individuals that decided to run as a team? Six of the seven candidates were either incumbents or had served in earlier administrations – (Thomas) A. Bailey, Dilworth Baird, Joseph T. Birchett, James B. Flumerfelt, Dr. R.J. Hight, and Hugh E. Laird . Two had been mayor elected by fellow council members – Birchett and Laird.

Only James H.A. Hazard, a major construction contractor had never served on the council. We’re left wondering if there is a hidden message to this broadside. Was the campaign rhetoric more than just what is stated on the broadside – especially in light of the cryptic admonition that concludes the advertisement: “Decide at the election Monday, whether Tempe shall take its proper place with the other progressive cities of the valley, or go back to a MUD STREET, MUD HOUSE AND MUDDY WATER classification.”

For the record, just three of the seven candidates were elected – Birchett, Hight and Laird – proving voters do make up their own minds. Behind this intriguing broadside is a dark side to the story – The State v Baird, et. al. That’s for next time.