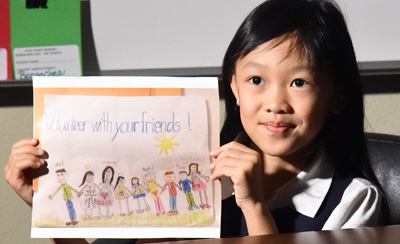 This year, nearly 50 years after King’s death, students across the state reflected on his teachings of freedom and equality by entering in a statewide essay and poster contest sponsored by the ASU MLK Jr. Committee.

Monday, January 16, 2017 is the American holiday recognizing and honoring the late human rights leader Dr. Martin Luther King, Jr., for all he did for equality and the Civil Rights Movement. Much more than just a federal holiday, this day is also known as the national Martin Luther King Day of Service, which was started by former Pennsylvania U.S. Senator Harris Wofford and Atlanta Congressman John Lewis, who together authored the King Holiday and Service Act. 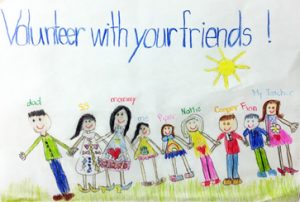 This act challenges Americans to transform the King Holiday into a day of citizen action volunteer service in honor of him. The federal legislation was signed into law in 1994. Several universities and organizations around the U.S., such as Arizona State University, participate in the Martin Luther King Jr. Day of Service. In honor of MLK, hundreds of volunteer centers and volunteers across the country donate their time to make a difference on this day.

This year, nearly 50 years after King’s death, students across the state reflected on his teachings of freedom and equality by entering in a statewide essay and poster contest sponsored by the ASU MLK Jr. Committee. Of the more than 1,300 who entered, only 24 students in grades K-12 were selected as winners of the committee’s annual children’s essay and drawing contest and will be honored at the Dr. Martin Luther King Jr. Breakfast Celebration January 19 at the ASU Polytechnic Campus.

Contest participants were required to either create a poster illustrating their definition of leadership through service or write an essay or poem about an individual who personifies that definition. This year’s theme is: “Be the face of change.”

Ward Traditional Academy Second-Grader Elizabeth Weng won first place with her colorful and beautifully illustrated poster. Usually a shy little girl, in her drawing, Weng shows herself lined up side-by-side, hand-in-hand with her parents, her sister, several friends, and her teacher, all with big smiles on their faces. The title meticulously written at the top reads: “Volunteer With Your Friends!”. Weng’s mother, Shirley Weng said her daughter loves to draw and write, so she found this contest and decided to have her enter. “Elizabeth volunteers a lot with her big sister who is in ninth grade, so she drew her poster about volunteering,” explained Weng. 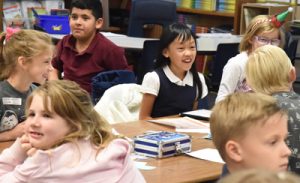 “Inspiring local youth and creating a dialogue about service and leadership throughout the community is an important way to honor Dr. Martin Luther King, Jr.’s work,” said Colleen Jennings-Roggensack, chair of the ASU MLK Jr. Committee, associate vice president cultural affairs for ASU, and executive director of ASU Gammage. “The contest is one of the many ways in which ASU engages and connects with communities while supporting Arizona’s young people as they learn about Dr. King’s role as a servant leader.”

Many of the drawings included themes of acceptance, leadership, service, kindness and many other ideals which Dr. Martin Luther King, Jr. exemplified.

All of the students’ work will be displayed at the Dr. Martin Luther King Jr. Breakfast Celebration, and guests will be given bookmarks decorated with the childrens’ poster artwork.

Very proud of her student, Weng’s teacher, Julie Stevenson said, “This is pretty exciting for Elizabeth, her family, and our class.”