It’s no secret that President Donald Trump is on the verge of ending the Deferred Action for Childhood Arrivals program; one reason is the myth that DACA recipients are taking American jobs.

Is this true or false?

Many in Trump’s administration have made remarks about removing DACA, which is a program created by former President Obama in 2012. DACA allows undocumented individuals who were brought into the United States as children, the ability to receive a renewable two-year work permit, drivers license and avoid deportation.

According to Thehill.com, White House press secretary Sarah Huckabee Sanders said, “I think that it’s a known fact that there are over 4 million unemployed Americans in the same age group as those that are DACA recipients. That’s a Large group of people that are unemployed that could possibly have those jobs.”

There are nearly 800,000 young immigrants who have qualified for DACA and more than 25,000 recipients live in Arizona. A recent study shows 91 percent of DACA recipients are currently employed and 5 percent of the respondents started their own business after receiving DACA, according to the Center for American Progress.

“Every month more than 800,000 new jobs get created in the U.S. economy, now, a substantial number get destroyed as well, but there are opportunities for people to find employment in probably 800,000 to easily more each month, than the number of total DACA people,” professor of economics at the W. P. Carey School of Business Dennis Hoffman said.

There are more jobs available each month than there are DACA recipients. In over the 12 months ending in September, the total hires in the country were 64 million people, and 62 million people either quit or lost their jobs, according to the Job Opening and Labor Turnover Survey from the Bureau of Labor Statistics.

Currently, there is little to no evidence that can provide exact information on DACA recipients causing negative effects on the U.S. employment rates. On the contrary, some experts and researchers say they might be impacting the economy in a promising way.

In early September CAP research showed that DACA recipients’ “legal employment status has a positive economic impact that creates jobs for others,” according to azcentral.com.

It’s hard to say what the next steps for DACA will be like, but the current executive director of the Arizona Dream Act Coalition and a DACA recipient, Karina Ruiz, argues that the statement that DACA recipients are taking American jobs is incorrect.

“We pay taxes on everything, we properly try to contribute to the economy by doing our part because we have no other benefits, we don’t receive medical care nor financial aid so this is how we contribute,” Ruiz said. “A lot of us are also homeowners and entrepreneurs who work hard to start small businesses to help our communities.”

Additional research reveals that there are many reasons why a citizen is unemployed.

“If you look at the unemployment rate before DACA started and then look at the unemployment rate now with DACA in effect more Americans are going back to work and so it’s not that DACA recipients are taking jobs but the jobs were not available to them because the economy was really still trying to recover from the recession,” Arizona Immigration Attorney Alicia M. Heflin said.

Few people actually don’t know what DACA means and what it does for these immigrants.

“DACA’s soul purpose wasn’t just to receive the ability to work but also the ability to have some identification and obtain a drivers’ license and to not always be looking over your shoulder when you’re just trying to support your family like everybody else,” Heflin said.

While there are many reasons on why DACA was started, some people believe it is still unclear on why the Trump administration is deciding to put an end to DACA.

“We are virtually in full employment, that means that the unemployment rate is so low that virtually anybody who wants a job has one,” Hoffman said. “There are plenty of jobs in this country.” 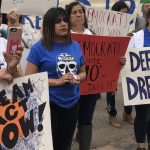