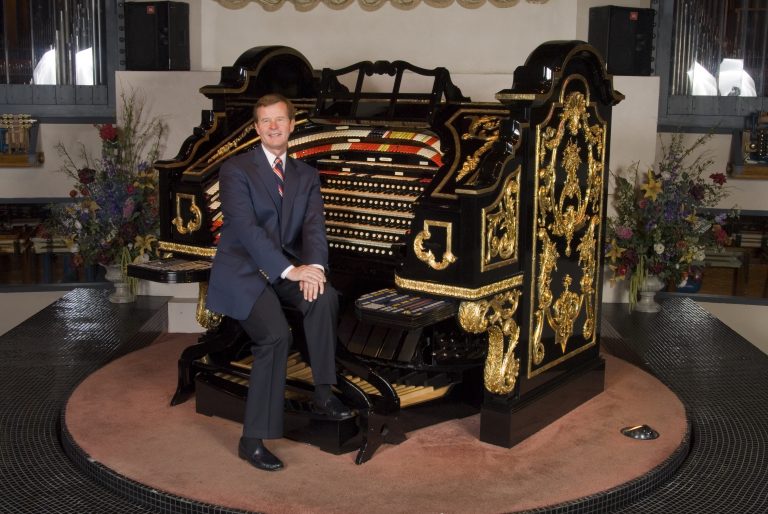 For more than 40 years, Lew Williams has been a staple at one of the Valley’s oldest restaurants – Organ Stop Pizza, in Mesa, Ariz. His talent and charisma have entertained customers of all ages for four decades, but like all good things, his time at the keyboards is coming to an end.

Friday, Sept. 10 will be William’s last official performance at the pizza and pipes restaurant, though he may be back for a special appearance every now and then.

“Lew really helped shape Organ Stop Pizza into the restaurant that it is today,” said Jack Barz, co-owner of Organ Stop Pizza. “His commitment to performance is second to none. His goal in performing has always been to get each piece as close to the original as possible. He feels he isn’t doing the piece justice until he gets it completely perfect. That’s why customers marvel at his talents.”

A native of Lafayette, La., Williams began playing the organ at the age of 10 and started formal piano studies five years later. At Texas Christian University, he was a pupil of Emmet G. Smith. During this time, he won several competitions in organ playing, gave numerous recitals, and graduated with the Bachelor of Music degree and Performer’s Certificate.  Williams joined the Organ Stop team in 1979, playing at both the Phoenix and Mesa locations.

Williams’ concert work has taken him around the U.S. many times, including seven concert tours in England, and in 1998 and 2003 he appeared in Australia’s national theatre organ convention at Adelaide. In 1988, Williams was named “Organist of the Year” by the American Theatre Organ Society. In December 2000, he performed the first solo theatre organ concert by an American at the Atrium de Chaville in Paris, France, returning for a second engagement in 2002.

“His talent is so vast and incredible, he certainly leaves huge shoes to fill,” Barz said. “Lew will be greatly missed by customers and staff alike. Organ Stop Pizza will forever be grateful for his years of performance magic.”

Over the years, Williams had many dedicated customers, going all the way back to the 1980s. His number one fan still comes in every Wednesday and Friday night to listen to him perform. According to Barz, this committed fan is the first customer in and the last to leave, every time she visits the restaurant.

“Williams’ fan base spans all age groups,” Barz said. “They are a very loyal bunch and many will only come in to hear him play. When it comes to his admirers, no one is better than Lew, in their opinion.”

“We are thrilled to have Glenn join organist, Brett Valliant at the console of our mighty Wurlitzer,” Barz said. “This is an incredibly exciting time at Organ Stop Pizza!”

Relocating to Mesa from Chicago, Ill., Tallar was twice awarded the ATOS Young Organist scholarships, allowing him to study with Jelani Eddington. A versatile musician, Tallar played baritone saxophone in bands throughout his high school and college years. He was the 2008 George Wright Fellowship Award winner which gave him the opportunity to attend his first ATOS convention in Indianapolis. Tallar is not only an impressive musician, he also has the skillset to do extensive repair work on the organ, a huge benefit for Organ Stop Pizza.

Serving the Valley for almost 50 years, Organ Stop’s Mighty Wurlitzer is the largest and finest theater organ in the world today. Its nearly 6,000 pipes, numerous percussions, and countless traps are masterfully presented by the musical staff who are world-class musicians. Organ Stop Pizza attracts hundreds of thousands of patrons each year with its theatrical performances complete with dancing cat puppets, disco ball and bubbles. Songs range from classical music and Disney favorites to pop and rock hits. Only cash and checks are accepted; an ATM is located in the lobby. For more information visit,  www.organstoppizza.com