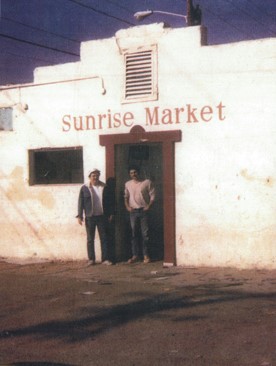 Originally published May 14, 2010 – In researching last week’s column about the Hispanic contribution to Tempe and the Valley, I learned just how long the culture has populated and been integral to the region. And it certainly makes sense since what is now Arizona was a part of Mexico until 1853.

San Pablo, an eighty acre enclave, located at the saddle of the two Buttes, now the site of Sun Devil Stadium was home to many Hispanics from Tempe’s earliest days. By the mid-20th century the area had been mostly acquired by ASU. What remained was absorbed into the city. Today there is no evidence of those who once lived there.

By the last days of San Pablo, many of its former residents had moved to Victory Acres — a bright, new neighborhood east of Tempe’s town limits. Its story begins with a pair of middle-Eastern immigrants.

The same year Tibshraney immigrated to America, 11-year-old Beirut-born Mary Kalil arrived in Mexico with her parents. It is there her family learned Spanish and became absorbed into the Mexican culture.

By 1932 George and Mary had met, wed and were living in Chandler. Together, they opened their first business – the Square Deal Grocery Store, the same year Najeeb Basha, another Lebanese immigrant, started his grocery.

The Tibshraney’s sold their business to Basha in 1939 and began selling cars in Mesa.

Near the end of WWII, the Tibshraney’s whose wealth was growing, sold a 600-acre ranch they owned near Prescott to purchase a farm along the Tempe Canal, east of Price Road between Transmission Rd (now University Drive) and Apache Boulevard.

Anticipating a demand for affordable housing by returning servicemen, the Tibshraney’s subdivided 80 acres of the northern portion of their farm into one-acre lots. They named their development Victory Acres in celebration of the U.S. WW II victory.

As did most subdivisions of the period, Victory Acres restricted sales to Anglos. But that did not prevent the Tibshraney’s from offering lots to returning Mexican-American servicemen – many of whom probably saw the urban decline of San Pablo and decided to build in a new neighborhood.

According to Santos Vega, Ph.D. who researched and assembled a wonderful record and oral history of the neighborhood, Victory Acres “…gradually developed into a close-knit Mexican-American barrio.”

Meanwhile the Tibshraney’s continued farming – planting “…peach, pecan and date groves, as well as some citrus.” They also “…raised cattle…sheep, and chickens.”

Much of their harvest was sold in Mary’s parent’s store — Kalil’s Market on Apache Boulevard.

Much of the information for this piece was gleaned from Vega’s fascinating 2004 book Victory Acres & Escalante Neighborhoods – Historia de la Communidad “Stories from the Community.”

If you want to know more about the Hispanic experience in Tempe, this is a must read. Or wait until next week when we’ll share some of the stories of Victory Acres residents.