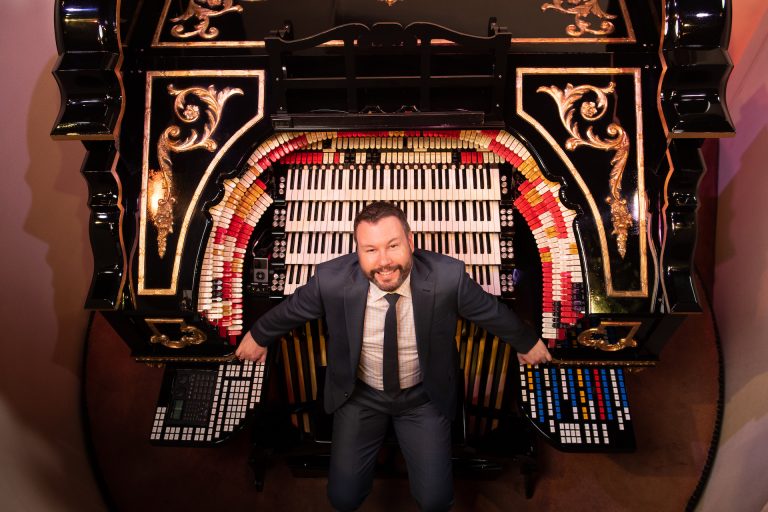 (Sept. 30, 2021 – Mesa, Ariz.) Brett Valliant, resident organist at the state’s oldest pizza restaurant, Organ Stop Pizza, in Mesa, Ariz., was recently honored as Organist of the Year by the American Theatre Organ Society. This award is presented annually to an outstanding organist who is currently active in the theatre organ art form through live performances and recordings. Recipients must have five years of experience or more and be actively performing publicly in the theatre organ field.

“Brett is an absolute crowd favorite because of his ability to play almost anything requested by our guests,” said Jack Barz, co-owner of Organ Stop Pizza. “He is amazingly talented and equally as humble and kind. He never hesitates to sit with guests and tell them about our world-famous organ and what it’s like to play it daily. He frequently spends extra time explaining and demonstrating the remarkable instrument to anyone who expresses interest, and will sometimes give a complete demonstration and explanation of the organ during his performances.”

Since arriving at Organ Stop Pizza just a little over a year ago, Brett has presented the famous Organ Stop Pizza Wurlitzer for approximately 250 individual performances, making him one of the most, if not the most, active theatre organists currently performing, especially during the pandemic.

Valliant joined the Organ Stop Pizza musical staff in 2015 as a substitute/guest artist and began playing a weekly schedule in January 2020, after relocating to the Valley of the Sun from Wichita, Kansas. His professional career began at age 11, and by the age of 15 he was playing concerts across the United States. Since then, Valliant has appeared in Europe, Canada, Australia and New Zealand. Additionally, in the U.S., Valliant has performed for the American Film Institute, as well as conventions of the American Theatre Organ Society and the American Guild of Organists.

“Winning this award is an honor because of the very fine musicians who have received this distinction in years past,” said Valliant. “It’s humbling to be on the list of recipients for the ATOS award. Music is a universal language that helps communicate feelings and emotions where words leave off. Bringing the musical experience to so many people in one room every day is a pleasure for me, and seeing people leave the restaurant with a smile on their face makes my day. I am proud to be part of this esteemed community.”

In addition to his regular playing schedule, Valliant is also the primary musical spokesperson for Organ Stop Pizza, promoting it and the theatre organ on countless TV and radio broadcasts. According to Barz, “Valliant’s enthusiasm for the theatre organ is highly infectious and people can’t help but to want to know more about it when he speaks about the art form.”

“I believe Brett is the number one ambassador of theatre organs in the world and he works diligently to promote the art form to more people in Phoenix and across the U.S. than anyone else,” Barz added. “We are beyond fortunate to call him a valued member of the Organ Stop Pizza family.”

Serving the Valley for almost 50 years, Organ Stop’s Mighty Wurlitzer is the largest and finest theater organ in the world today. With a value of more than $6,000,000, the 6,000+ pipes, numerous percussions, and countless traps are masterfully presented by the musical staff who are world-class musicians. Organ Stop Pizza attracts hundreds of thousands of patrons each year with its theatrical performances complete with dancing cat puppets, disco ball and bubbles. Songs range from classical music and Disney favorites to pop and rock hits. For more information visit,  www.organstoppizza.com 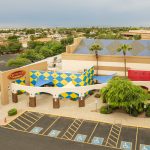